Hardkernel released the Amlogic S922X- powered ODROID-N2 dev board back in February of this year. Now the company has teamed up with the developers at CoreELEC to offer up a plug-and-play set top box built around the N2. 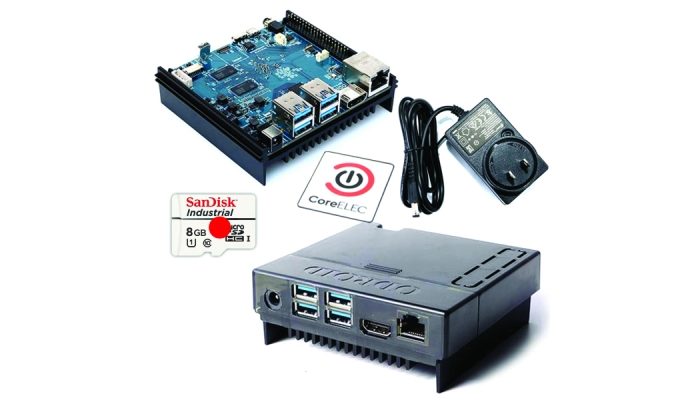 The board itself hasn’t changed. It features the same hexa-core processor with four 1.8 GHz ARM Cortex-A73 CPU cores and two 1.9 GHz ARM Cortex-A53 cores. Configurations with 2GB and 4GB of RAM are available and you can use either eMMC modules or micro SD for storage. Ordinarily neither is included, but the ODROID-N2 Media Center Edition comes with an 8GB micro SD card.

To make it easy to get it up and running out of the box, the card comes pre-loaded with CoreELEC’s minimal Linux OS and Kodi. It all makes for a very capable little media player — one that can handle 4K HDR video, DTX:X and Dolby Atmos audio passthrough. Full Widevine DRM support ensures that you’ll even be able to enjoy full HD Netflix.

Hardkernel says the ODROID-N2 is the “most affordable Arm based Linux board with proper 4K HDR support.” The CoreELEC Edition, then, is an even more affordable option.

They’re offering up a limited number of the bundles — which include a 12V 2A power supply and case in addition to the 8GB micro SD card — at a discounted price. The 2GB version is priced at $65 and the 4GB version is just $10 more. You’re getting all the extras and paying $5 less than you’d pay for the ODROID-N2 on its own.

Saving around $20 is great and the added convenience makes the deal even better. You don’t have to know where to find firmware for the board or how to properly install it to a micro SD card, just plug things in start poking around in the Kodi interface.