It also happens to be just 0.63 inches thick and weighs less than 4.1 pounds. 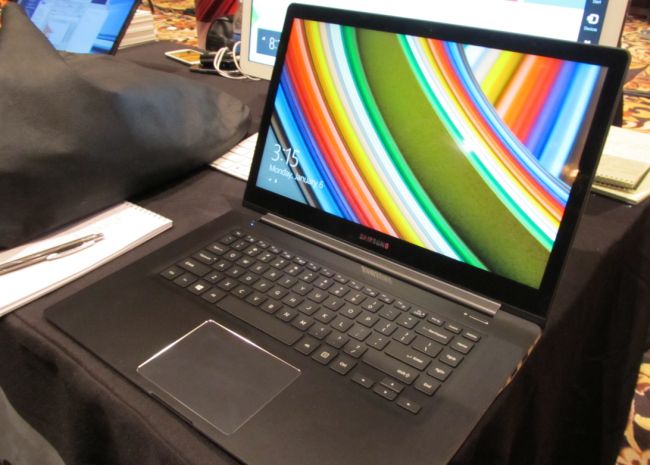 While that makes the Ativ Book 9 a bit heavier than some of Samsung’s other ultrabooks, it’s still probably one of the thinnest and lightest 15.6 inch laptops you’re likely to find.

The notebook features an Intel Core i5 or Core i7 Haswell processor, Intel HD 4400 graphics, 8GB of RAM, and up to 1TB of solid state storage. Since it’s a bit larger than some ultrabooks, there’s room for things like a full-sized HDMI port, and 3 USB ports (two are USB 3.0 ports and one is a USB 2.0 port).

There’s also a mini VGA port, an SD card slot, and an Ethernet port — but you’ll need to use an adapter to connect an Ethernet cable.

Samsung says the 1920 x 1080 pixel display is 20 percent brighter than previous generation Ativ Book 9 screens and offers wide viewing angles. But it’s the 14 hour battery life claim that really grabbed my attention. I’ve been using a 13 inch Samsung Series 9 ultrabook with a 2nd generation Intel Core i5 processor since late 2011, and while I love the size, weight, and display I could do with better battery life. My ultrabook ran for up to 6 hours when I bought it, but over a year later it has a battery that’s only good for about 4.5 hours of run time.

Samsung hasn’t yet announced the price or launch date for the new Ativ Book 9 2014 Edition.