Samsung’s Notebook 9 Series laptops are getting a design and hardware refresh for 2018, with new models weighing as little as 2.2 pounds and supporting up to an 8th-gen Intel Core i7 quad-core processor.

The new model has a magnesium alloy case that almost feels like light-weight plastic (it’s not cool to the touch the way metal laptops are), but which feels tough enough to withstand a bit of wear and tear. It’s also part of what makes the new laptops so dang light.

Samsung is introducing a model with a 13.3 inch display and a 75 Wh battery that weighs just 2.2 pounds, and a convertible model with the same screen size and weight (but a smaller, 39 Wh battery). 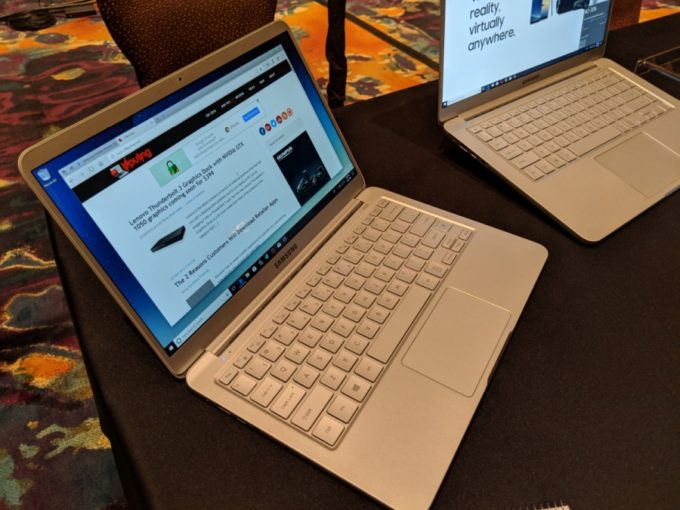 I got a chance to spend a few minutes with the Notebook 9 (2018) with 13.3 inch and 15 inch displays as well as the Notebook 9 Pen which is a convertible tablet-style device.

The Samsung Notebook 9 Pen has a 360-degree hinge that lets you use the computer in notebook, tablet, or tent mode. And weighing in at 2.2 pounds, it’s actually light enough to comfortable hold in one hand, which is unusual for a convertible with a display this large.

Samsung also includes an S-Pen stylus with this model, and there’s a slot in the notebook to store the pen when it’s not in use.

What they do have are hinges that can open to a 180 degree angle, compact designs, and big batteries.

All three Samsung Notebook 9 models have backlit keyboards, USB Type-C ports, and 8th-gen Intel Core processors. They all use NVME PCIe solid state storage and come with up to 16GB of RAM.

The company is also showing off its upcoming Notebook 7 Spin, which is also a convertible laptop with a 13.3 inch display. But that model is almost 50 percent heavier, featuring a metal chassis and weighing in at 3.4 pounds.

Samsung hasn’t announced the price or release date for these new laptop yet.