The Samsung Notebook 7 Spin may not be quite as thin or light as the company’s new Notebook 9 Series laptops and convertibles. But this 3.4 pound laptop with a 13.3 inch display and a metal chassis that measures 0.7 inches thick is expected to be a more affordable alternative to Samsung’s premium thin and lights.

Samsung hasn’t announced the price for this model yet, but the Notebook 7 Spin is expected to be available for purchase by the end of March. 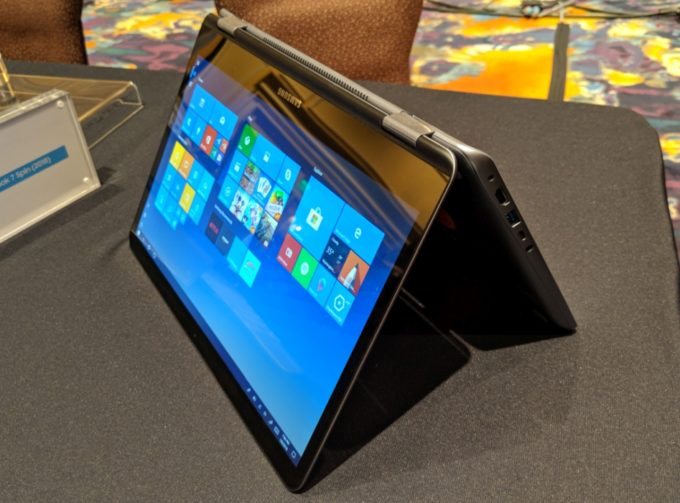 Picking up the convertible notebook right after putting down a Notebook 9 Pen was a bit of a shock. Normally a 3.4 pound laptop feels fairly light. But compared to its 2.2 pound sibling, this convertible actually feels kind of heavy.

The good news is the metal chassis kind of makes the Notebook 9 Spin feel like the premium model. The magnesium alloy case on Samsung’s more expensive notebooks almost feels like plastic.

But while the Notebook 9 Spin isn’t exactly heavy by notebook standards, it is kind of unwieldy for a tablet. It’s not really designed to be held in one hand, but you could still flip it to tablet mode and prop it up on a table or lap for touchscreen use. It also supports tent and stand modes.

You can use an active pen with this convertible, but you’ll have to buy one separately since Samsung doesn’t bundle a pen with the tablet. There’s also no spot inside the notebook to safely store a pen when you’re not using it.

The Samsung Notebook 7 Spin features a 43 Wh battery, USB Type-C and Type-A ports, an HDMI port, a headset jack, and a backlit keyboard.

3 replies on “Hands-on with the Samsung Notebook 7 Spin”