A few years ago when Samsung first launched the Galaxy Tab line, the company got a bit of a reputation because it seemed to put out a new tablet every other week. For a while there Galaxy Tabs proliferated at a rate only rivaled by ASUS’ netbook output. More recently Samsung backed off from that pace, instead releasing a few strategically placed tablets a year. That might be about to change. Following on the release of the Galaxy Tabs this summer and the Galaxy Note this fall, now we have the Galaxy Pros at CES. This line includes not just one but four tablets ranging from 8.4 up to 12.2 inches. Are we about to have a baby rabbit situation again? 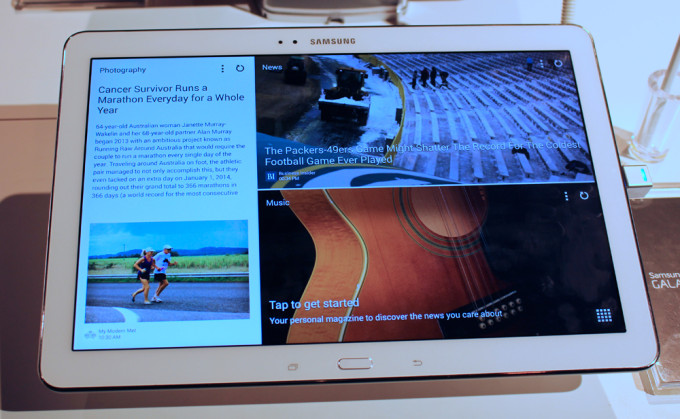 Maybe? All of the tablets share the same basic outer design, the same design as the Galaxy Note 10.1 2014 Edition. The Galaxy Note Pro is just a bigger version of that tablet, while the Galaxy Tab Pro 10.1 is the Note minus the pen. While I like the design a lot, some differentiation between consumer and “pro” tablets would be nice.

There are some differences in the software and UI. The Magazine UX is attractive, well thought out, and actually takes advantage of the screen far better than stock Android. It’s more intense and disruptive than TouchWiz but has the same aesthetic language and color scheme, which has little place in a business environment.

Then again, the Pro nomenclature could just be a ploy from Samsung to get people thinking of these as high-end tablets worthy of a high-end price. They each have very high resolution (and colorful) displays, the three largest sport BIGsmall octa-core processors, and all of them are light for their size, none of which is inexpensive to pull off. Samsung hasn’t announced the pricing yet, but I’d hazard a guess that they’ll cost more than their nearest competitors.

After spending some hands-on time with all four of the tablets I came away impressed with their speed, design quality, and even some aspects of the interface. I can see how they’d fit into an SMB workflow or work for a person who splits their time evenly between productivity tasks and entertainment. The 12.2-inch size is too big for someone who is more concerned with mobility–yes, you could carry it everywhere but at that size why wouldn’t you just get a laptop?–but could work for porting around an office easily. I much prefer the 8.4-inch size since it keeps all of the nice workflow in the UI while being small enough to carry and hold everywhere. If only it had a pen…

What say you, dear readers? Does is the Pro line professional enough for you or would you rather a regular Tab or Note?