When Samsung and Nook finally unveiled the tablet they were launching together, the only real mystery about the $179 Galaxy Tab 4 Nook was to what extent the Nook software would run the show.

I don’t think many people expected to see Samsung hardware and the same Nook version of Android used on older tablets like the B&N NOOK HD (which is sad, really, because it was a slick interface). But I had hoped that the experience would be different from what you get when you install the Nook app on any Android. And in some respects, it is. Just not so much that you mistake this tablet for anything other than a Samsung product. It is running TouchWiz, after all.

If that doesn’t scare you away completely, read on for my first impressions. 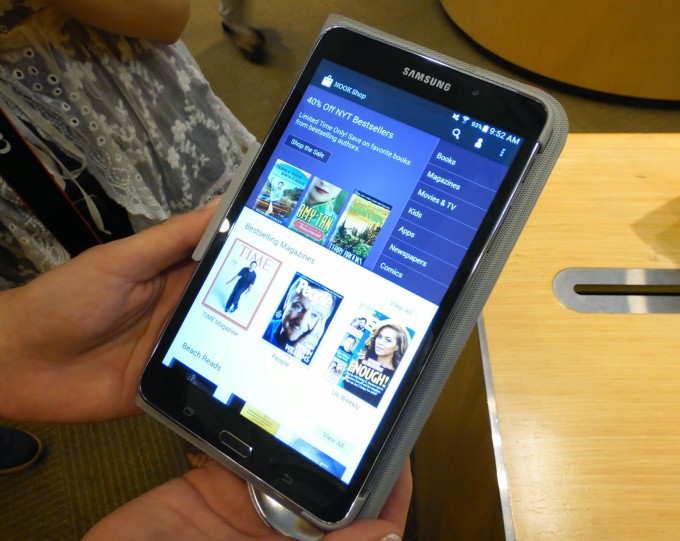 The Samsung Galaxy Tab 4 Nook is physically identical to the 7 inch non-Nook Galaxy Tab 4 7.0 which launched earlier this year.

It’s got 8GB of on board storage, a 1280 x 800 resolution display, quad-core processor, and a light 9.7 ounce weight, just to name a few key specs. All of this is perfectly acceptable for a sub-$200 Android tablet, though I do miss the slightly higher resolution display like the one on the Nook HD 7.

Pixel density really does matter on devices where reading eBooks is front and center, since it means crisp fonts even at tiny sizes. The sharpness of the Nook Galaxy is nothing to complain about. And I’m a fan of the colors, saturation, and brightness. It just feels like a step backward.

All the changes and differences to be found are on the software side. The Nook experience is front and center from the moment you turn the Tab on thanks to custom Library widgets on the primary Home screen. The normal Galaxy-branded content gateways are still around, they’re just not the star of the show anymore.

There are multiple Nook icons to access your library, Nook apps, the store, and Nook Today (more on this in a bit). The only tweak Samsung made to its interface that’s unique to the Nook version is a book icon that persists on the bottom left of all Home screens. That puts you right back into the last thing you were reading, be it a book, magazine, or comic.

Nook Today is a nice discovery engine for people who don’t know what they want to read next or want suggestions from people in the know. Barnes & Noble is always quick to point out the value of their employees’ expertise when it comes to recommending great things to read.

The Tab 4 Nook allows up to six separate profiles and has parental profile management for kids so you can decide which apps and books they have access to, among other things.

And that’s it. Otherwise, the reading experience is the same as you’d get with the NOOK app on other tablets. Right now the Tab 4 Nook doesn’t have any extra features or goodies the Android Nook app doesn’t (which was often the case in the Nook Color, Tablet, and HD days). Magazines still look awesome, you get several font, text size, and theme choices when reading books, and the Library interface is well organized.

I know some of you were hoping for a TouchWiz-free experience with this device. Sorry. I’m not that put off by the skin, especially in it’s current incarnation. I will admit it can be overwhelming on some fronts. If you’re not a fan of Samsung tablets and their interface, then the new Nook isn’t for you. It is beneficial for the target audience, though. Folks upgrading from a Nook HD or Nook tablet are used to a simple, accommodating interface, and TouchWiz does give you that, if nothing else.

Given that there are no limitations on content or apps on this Nook, there is no downside to buying this over any other Android tablet. And if you’re still in love with the Nook ecosystem and want to be able to walk into any Barnes & Noble location and get help with your device, then this is a good buy.

There’s just no super compelling reason to pick up this tablet otherwise. At least, not right now.

Things have been rough for the Nook team these past few years. People are reading more than ever and maybe they’ve picked up some extra customers escaping from the Amazon vs Publishers war going down right now. But what I did not see during today’s presentation or during my hands-on time with the Nook are any upgrades or overhauls in the Nook eBook reading system itself.

There’s still no support for syncing personal documents or your own eBooks, no way to export notes and highlights, few ways to dig deep into content (something akin to Amazon’s X-ray feature for Kindles). I’m hoping that this will change now that Nook no longer has to worry about the hardware side of things and can concentrate on making the software shine. And as there are no carriers in the mix, dare I hope for many updates in the future?

My first impression is that the Galaxy Tab 4 Nook is pretty sweet and a nice upgrade for Nook lovers. It’ll do well with folks who aren’t technical and who love eReading, and that’s pretty much been the story of tablets named Nook since the first one came out.