When Samsung introduced the Galaxy S4 it felt like the company was trying very hard to make a phone that did about 10 thousand things so that every person in the world would find at least one or two of them that they couldn’t live without.

The launch of the Galaxy S5 seems tame in comparison, as does the phone itself. There’s not much in the way of new hardware (though what is new is significant) or new design or new software features. Samsung claims that they’re focusing on what customers really want, including ever better cameras, speedy connections, and features that enhance their lives. So far, it looks like the company succeeded.

In the hand, the Galaxy S5 doesn’t feel significantly different than the S4. It about the same size and weight and the screen is only 0.1-inches larger than the last generation. It looks like for flagship phones the hard line is around 5 inches, and I can’t complain about that. The dimpled back has a nice soft-touch coating that will make it harder to drop and feels good to hold. Yes, the S5 is still made of plastic. And yes, it still feels like it’s made of plastic. Samsung isn’t giving up the removable back and access to the battery microSD card slot. I can’t complain about that, either.

Another design element the GS5 keeps is the physical home button flanked by capacitive buttons on either side. The Home button has a fingerprint reader that I wasn’t able to test in my short hands-on time (or get a working demo). Fooling around with it, I noticed something new that Samsung didn’t talk about in their presentation: lack of Menu button. Yes, Samsung has finally dropped Menu and replaced it with a Recent Apps button. It feels like the end of an era. 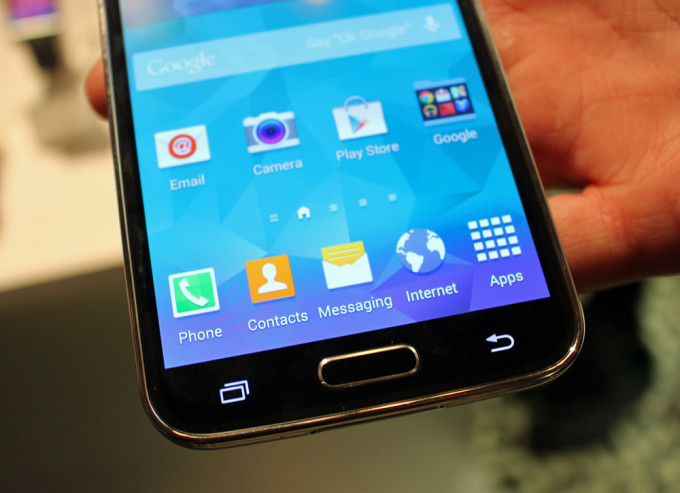 This changes the long-press options for the buttons. If you long-press Home it brings up Google Now, and if you long press Recent Apps it takes you to the Home screen edit area. Long pressing Back still turns MultiWindow on and off.

Other than gaining megapixels (16 now), the camera is also more simplified. There are fewer Modes available at first and now users can download more if they want. The bad side of this is that some modes will cost money. In-app purchases are everywhere! Still, the most useful (and likely most used) are just a tap away, like HDR. The demo area doesn’t have many great picture taking opportunities, so my tests were limited. The autofocus does appear to be faster than the Galaxy S4 and selective focus works mostly the way it does on standalone cameras. You’ll still be able to get excellent pictures out of this phone, and now you won’t have to wade through as much stuff to do so. 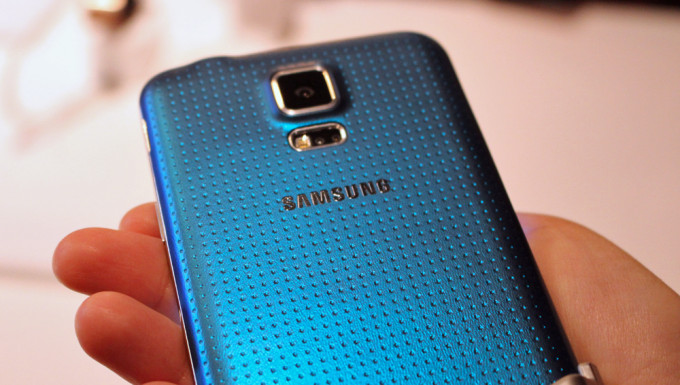 Hanging out next to the camera and flash is a heart rate monitor, a feature that ties into the lifestyle aspect of the S5 and might eliminate the need for a separate fitness tracker. Tracking steps is useful, but knowing if you’re reached a specific heart rate zone is even more helpful when walking or running. Sadly, I couldn’t get the monitor to work on the demo units I tried. It may require holding your finger a certain way and the instructions said not to move or talk, so it seems pretty finicky. However, these aren’t production-ready devices, so I’ll hold off judgment until April.

In general, I like the idea of a phone that can track a wider range of health metrics. And when paired with the Galaxy Gear devices, it will do an even better job.

On the software side, the overall UI (are we still calling it TouchWiz? Not sure) is the same as on the Galaxy Note 3 except in the Notification shade and in the Settings area. The design language there is cleaner and more iOS-like and retains the customization options from the last generation. The S5 performed well during my short time with it and didn’t stutter or show any other signs of being underpowered. Samsung didn’t make a big deal out of specs in the presentation, either, which may indicate that the company wants to highlight what the device can do more than what’s under the hood making that happen.

My first impression is that the Galaxy S5 is a good but incremental update to the Galaxy S4. The additional features–hardware and software–are substantive and not just for being showy. Design-wise, it’s an attractive, holdable phone that doesn’t feel cheap and has the bonus of being water and dust-resistant. The screen is beautiful, sound quality is on par, and the UI is workable. It might not entice S4 owners to upgrade, it should spur plenty of S3 and Galaxy Note 2 owners to get on that upgrade come April.

5 replies on “Hands-on with the Samsung Galaxy S5”