The Samsung Chromebook Plus is a notebook with a 12.3 inch, 2400 x 1600 pixel touchscreen display, a hinge that lets you fold the screen back 360 degrees so you can hold the computer like a tablet, and a digital pen that looks like the kind Samsung offers with its Galaxy Note smartphones.

That makes the Chromebook Plus one of the first Chrome OS devices to ship with a pen that you can use to scribble notes or draw pictures, among other things.

Samsung plans to sell the Chromebook Plus for $450 starting in February. There’s also a second model called the Chromebook Pro coming a few months later, but that model has a different processor and it will also probably have a higher price tag. 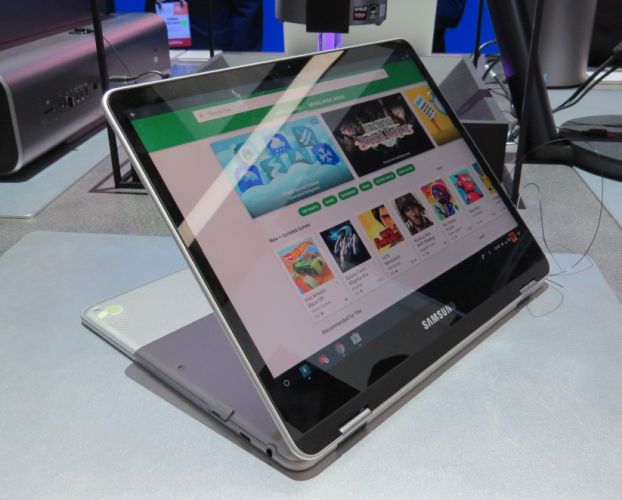 That’s because the Chromebook Pro features an Intel Core M3 processor, while the Chromebook Plus has an ARM-based chip called the OP1… although it seems like that may just be another name for Rockchip’s RK3399 hexa-core processor.

The display is crisp and clear, and the 3:2 aspect ratio makes the system look great in portrait or landscape mode. And the computer is compatible with Android apps out-of-the-box, so you can download millions of touch-friendly applications from the Google Play Store.

In a lot of ways, the Chromebook Plus is like a souped up version of last year’s Asus Chromebook Flip. The new Samsung laptop has a bigger, higher-resolution display, a faster processor, and pen input. But it’s still a compact convertible Chromebook with Google Play support and an ARM-based CPU.

But as much as I want to love it, I find that a 12.5 inch tablet that weighs 2.4 pounds just isn’t as comfortable to hold as a the 10.1 inch, 2 pound Chromebook Flip. I have a hard time imagining using this model in tablet mode very much. 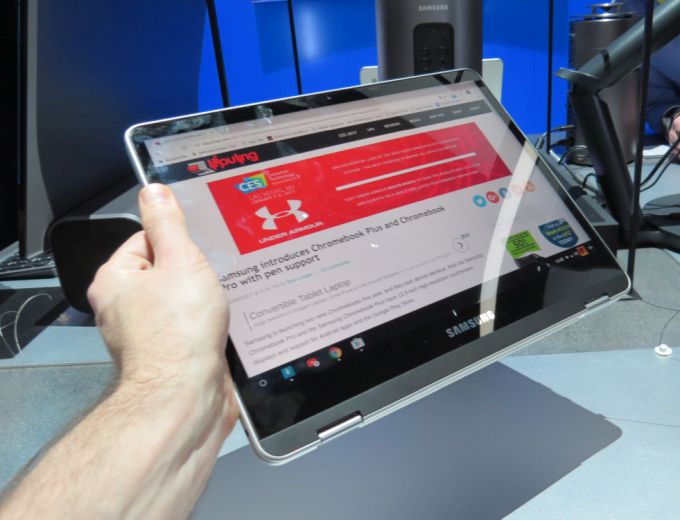 The trend in Chromebooks seems to be moving toward larger, more powerful systems though. Asus also launched a new Chromebook Flip this year… and it’s also a 12.5 inch model with premium specs and a premium price: it’ll sell for $499 and up.

As for Samsung’s model, it does have some pretty nice hardware. The system measures about 0.55 inches thick, features a 39Wh battery, and two USB Type-C ports as well as support for 802.11ac WiFi and Bluetooth.