Lenovo’s new 12 inch Windows tablet with a keyboard cover is set to go on sale within the next few weeks. The Lenovo Miix 700 features a 2160 x 1440 pixel display, an Intel Core M processor, and support for up to 8GB of RAM and up to 256GB of storage.

Prices are expected to start at $699, making the entry-level model about $200 cheaper than the lowest-priced Microsoft Surface Pro 4.

I got a chance to spend a few minutes with a Miix 700, and here are some things I learned. 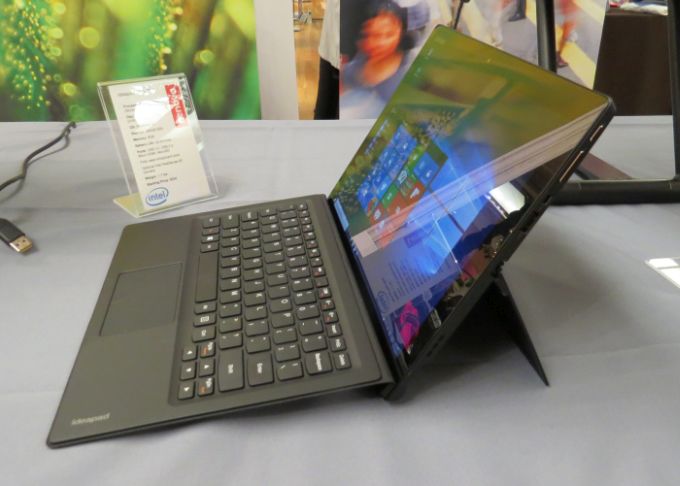 The tablet weighs about 1.7 pounds and measures 0.35 inches thick. While that makes it rather large for a tablet, it’s reasonably comfortable to hold in one hand while using your other hand to tap or swipe on the screen. It’s not hard to imagine using this tablet while sitting on a couch or lying in bed… or while wandering a retail or warehouse floor.

On the back of the tablet you’ll find a kickstand which props up the tablet for use on its own or with a keyboard. The kickstand is rigid enough that you probably won’t accidentally adjust the screen angle when you reach up and tap the tablet. But it’s relaxed enough to let you easily adjust the angle: and the stand supports a wide range of angles so that you can have the tablet lie nearly flat on a table or at a close-to-90-degree angle.

The keyboard cover has a reasonably large touchpad that seems pretty responsive and a chiclet-syle keyboard layout with keys that offer decent travel. Typing on the keyboard almost feels like typing on a typical laptop keyboard. The reason I say almost is that the keyboard itself can wobble a bit as you type. The keyboard flex didn’t really bother me much during my brief test, but I know that this sort of thing bothers some people — and there’s definitely a bit more flex here than on a typical laptop keyboard.

The keyboard has a docking connector for attaching to the keyboard, and it’s held in place with magnets, making it pretty easy to connect the keyboard quickly. It’s like it wants to snap into place. You can also give the keyboard a bit of a tilt by folding up a portion of the cover so that it snaps against the tablet. You’ll increase the keyboard flex/wobble a little bit when you do this though.

Place the entire keyboard over the front of the tablet and it can also be used as a screen cover.

Lenovo will offer the Miix 700 with up to 8GB of RAM, up to 256GB of solid state storage, and up to a Core m7 Skylake processor. Entry-level models will probably have less of each.