The Toshiba dynaPad is a Windows tablet with a 12 inch screen and a digital pen that lets you write or draw on the screen with 2,048 levels of pressure sensitivity.

Toshiba began taking pre-orders for the tablet this week. There’s also an optional keyboard dock which sells for another $100.

The company is showing off the 2-in-1 tablet at CES this week, and after spending a few minutes with the tablet, I find that I have somewhat mixed feelings about it. 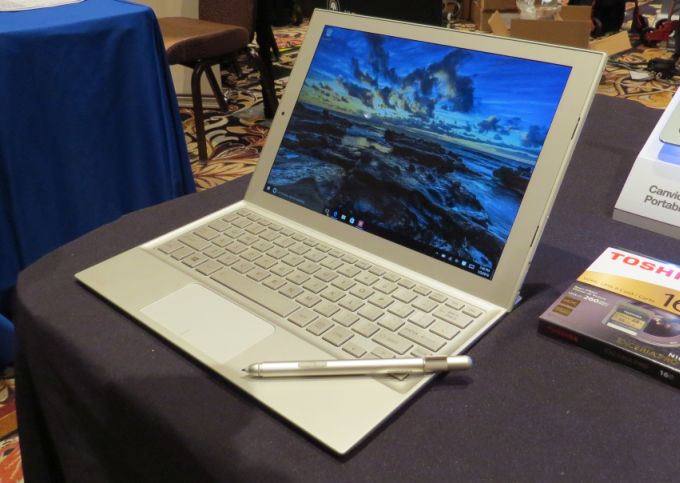 On the one hand, the 12 inch, 1920 x 1280 pixel display looks pretty good, and there aren’t a lot of tablets in this price range with support for a Wacom active stylus.

On the other hand, the keyboard dock is sold separately and doesn’t have any sort of adjustable hinge. When you dock the tablet, you can’t tilt the screen back or forward the way you would with a laptop. You almost might as well be using a Bluetooth keyboard.

The HP Pavilion x2 12, by comparison, has a detachable keyboard with an adjustable hinge that allows you to really use the computer like a notebook. That tablet has a 12.1 inch, 1920 x 1280 pixel display and sells for $500 and up. HP includes the keyboard in that price, but if you want a pen for HP’s tablet, you’ll have to buy one separately.

The tablet weighs about 1.3 pounds, has an Intel Atom x5-Z8300 processor, and features 4GB of RAM, and 64GB of storage. It supports 802.11ac WiFi and features two micro USB 2.0 ports, a micro HDMI port, and a microSD card slot.

There’s also a slot in one side of the tablet that you can use to attach the Wacom pen when it’s not in use. The pen doesn’t slide all the way into the tablet, but it does latch onto the side so that you won’t lose it… unless you find it awkward to hold a tablet with a pen hanging out on the side and remove the pen and lose it in the couch cushions.