Toshiba is updating its line of Chromebooks with a new version of last year’s Chromebook 2. The design is pretty much the same, but there’s a lot more power under the hood since the 2015 Chromebook 2 is available with an Intel Celeron or Core i3 Broadwell processor, while last year’s model had a Bay Trail CPU.

The new Chromebook 2 should be available around October 5th for $330 and up, and I got a chance to spend a few minutes with a demo unit recently. 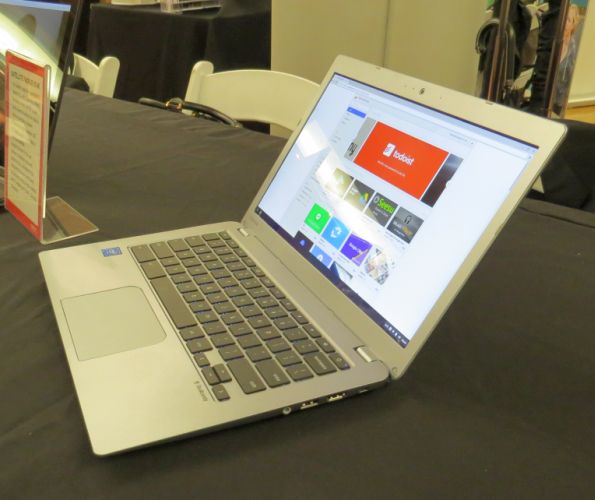 Toshiba’s original Chromebook 2 came in a handful of different configurations, with some models featuring full HD displays and 4GB of RAM, while other model had 1366 x 768 pixel displays and 2GB of memory.

For the new models, there’s less variation. The only difference between the Celeron and Core i3 models is the processor. You can pay $100 more if you want the extra power that comes with a Core i3 Broadwell chip, but both versions of the 2015 Chromebook 2 feature 13.3 inch, 1920 x 1080 pixel glossy IPS displays, 4GB of RAM, 802.11ac WiFi, HDMI output, stereo front-facing speakers, dual-array microphones, and USB 2.0 and 3.0 ports.

At first glance, the new Chromebook 2 looks nearly identical to the Bay Trail model I reviewed last year. You still have a wide touchpad, a full-sized keyboard, and relatively slim bezels around the display.

But Toshiba has made a few tweaks. The keyboard is now backlit, and there’s a vent on the bottom of the laptop because there’s a fan to help keep the system cool (which is necessary thanks to the higher-power processors).

While these aren’t the cheapest Chromebooks available, the $330 Celeron and $430 Core i3 models are still reasonably affordable for portable notebooks (they weigh about 2.9 pounds).  It’s nice to see a growing number of Chromebooks with better-than-entry-level specs.