While Intel’s Clover Trail chip has proven more popular with tablet makers in recent months, I had a chance to spend a few minutes with the Vizio Tablet, and I have to say the AMD Z-60 seems to handle Windows 8 quite nicely. 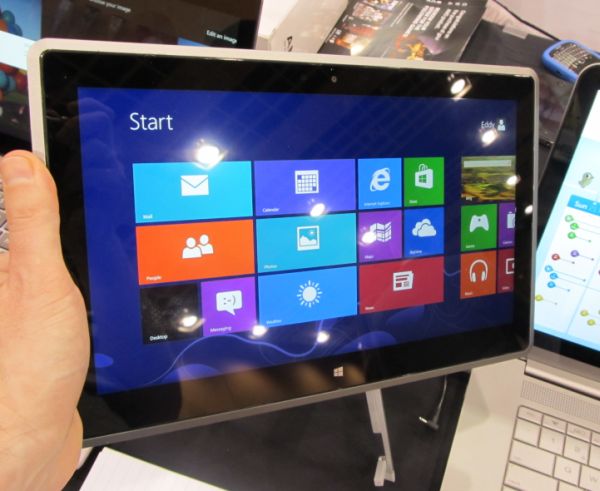 The Hondo chip is an x86 processor, which means the Vizio Tablet PC can run the full Windows 8 operating system and not just Windows RT. In other words, you can run Windows 8 “Metro” style full-screen apps, but you can also install and run third party desktop-style apps.

Plug in a mouse and keyboard and you could essentially use the Vizio tablet like a low power laptop. Hook up an external display, and it’s effectively a Windows 8 desktop PC.

The tablet itself features 2GB of RAM, at least 64GB of stolid state storage, and an 11.6 inch, 1920 x 1080 pixel display. It weighs about 1.66 pounds and feels pretty comfortable when you hold it in landscape mode.

Like many other 11.6 inch tablets, it feels a bit clunky in portrait orientation since the weight is balanced a bit wrong for that mode. A 768 x 1366 pixel display is also much taller than it is wide, which makes reading web pages and other content kind of awkward in portrait mode anyway.

While I didn’t get a chance to really put the tablet through the paces, it felt very responsive when launching and switching apps and it seemed to handle automatic screen rotation a little more quickly than some Windows 8 tablets with Intel chips that I’ve used.

The tablet has a Windows Experience Index of 2.7, which means it’s clearly not going to be up to the task of hard-core gaming or other tasks that can really tax the processor. But as a full Windows 8 tablet, it’s much more versatile than a Windows RT tablet with an ARM-based chip.

While the Vizio Tablet PC is initially shipping with an Hondo chip, AMD says eventually Vizio plans to upgrade to a faster AMD Temash chip after the next-generation processor is released later this year.

One problem though, is that high resolution 1080p display. It looks great when running full-screen apps. But in desktop mode text can be very, very tiny — and that can make it hard to select text, tap on the right icon, or perform other actions with your fingers.