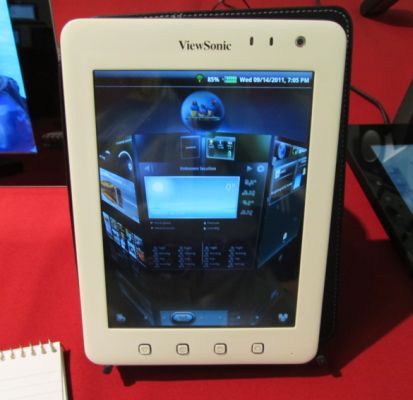 The ViewSonic ViewPad 7e is a 7 inch budget tablet which is expected to launch soon for about $200. The tablet has an 800 x 600 pixel capacitive touchscreen display and a rather chunky case, especially when compared with more svelte tablets such as the ViewSonic ViewPad 7x or Acer Iconia Tab A100. But during a brief hands-on with the tablet tonight, I found the ViewPad 7e to offer a pretty compelling user experience.

The little tablet is very fast and responsive, with an unspecified 1 GHz processor. It features a home screen launcher based on SPB Mobile shell which offers some fun visual eye candy, including a 3D carousel for switching between your home screens to view different widgets or application shortcuts.

I’m not in love with the four big plastic buttons below the display. On the one hand, they’re easy to find and press, but they’re a lot less elegant than the capacitive touch buttons found on more expensive tablets.

The ViewPad 7e features WiFi, Bluetooth, and HDMI. It runs Android 2.3 Gingerbread, and while the tablet doesn’t include access to the official Google Android Market, ViewSonic does load it up with the Amazon Appstore as well as a few other third party apps (including Amazon Kindle and Amazon MP3 apps… so if you don’t want to wait for Amazon to release its Kindle tablet, you can get a taste of the Amazon experience from ViewSonic.

ViewSonic expects the ViewPad 7e to go on sale in late October for about $199.

2 replies on “Hands on with the ViewSonic ViewPad 7e”