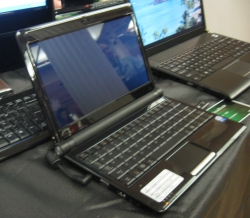 Viewsonic has been showing off a line of netbooks since January, but now it looks like the company is finally ready to bring a low price mini-laptop to market. The Viewsonic VNB102 is pretty much what you’d expect from a 10 inch netbook with an Intel Atom processor. It has 1GB of RAM, a 160GB hard drive, a 1.6GHz Intel Atom N270 CPU and 10.1 inch 1024 x 600 pixel display.

The laptop is shipping with Windows XP Home Edition and a 3 cell battery for $349. Another $50 will get you a model with a 6 cell battery.

The company had a demo unit running Linux on hand at the Pepcom trade show in New York on Thursday night, but there are no plans to sell the VNB102 with Linux. Still, I suppose it’s nice to know that it’s Linux-ready, but given its similarities to virtually every other Atom powered netbook on the market, I’d be more surprised if it couldn’t run a Linux distribution or two.

You can check out a few more photos after the break. The folks at laptop Magazine also have details on ViewSonic’s ViewBok Pro VNB132 which is a 13 inch laptop with a dual core Intel CULV processor.