The Velocity Micro NoteMagix U is an ultrabook with a 14 inch. 1366 x 768 pixel display, an aluminum case (that quite frankly looks like plastic), and an optical disc drive.

Velocity Micro is offering several versions of the NoteMagiX U including an entry-level model that has a starting price of $800, making it one of the more affordable ultrabooks featuring a DVD drive. It’s just a shame that it also features a 1366 x 768 pixel display. 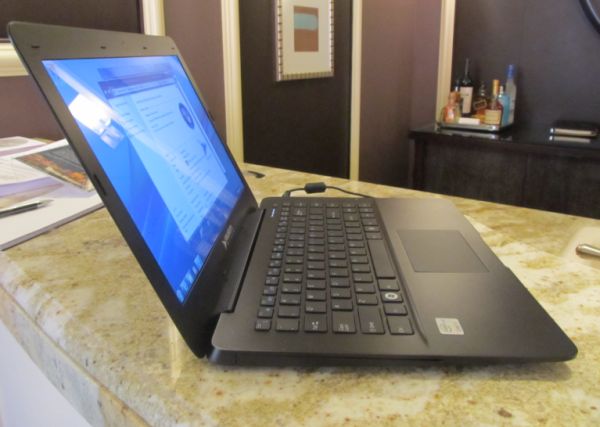 Velocity Micro also offers models with Core i5 and Core i7 chips, and up to 240GB of solid state storage, with prices hitting about $1100 for a top-of-the-line model.

The company is showing off a model running Windows 7, but the ultrabook is also available with Windows 8. According to representatives of the company, there’s still a lot of demand for models with Windows 7 from customers that aren’t comfortable with Winodws 8.

At about 4 pounds, the NoteMagix U470 isn’t the lightest ultrabook around, but it’s not bad for a notebook with a disk drive.

The keyboard was reasonably responsive in my brief hands-on, but I was less impressed with the touchpad, which didn’t register taps a couple of times while I was using the notebook.

The laptop features 4GB of RAM and a non user-replaceable battery which Velocity Micro says is good for up to 6 hours of run time.