The Velocity Micro Edge Mini is a tiny desktop computer with an Intel Core i3 processor, Intel HD 4000 graphics, and a solid state disk. It measures just 4.3″ x 4.3′ x 1.5″, but offers enough power to serve as a full desktop PC or a home media center.

Velocity Micro plans to sell the Edge Mini for $499 and up, with the base model featuring 4GB of RAM and a 64GB mSATA solid state disk. 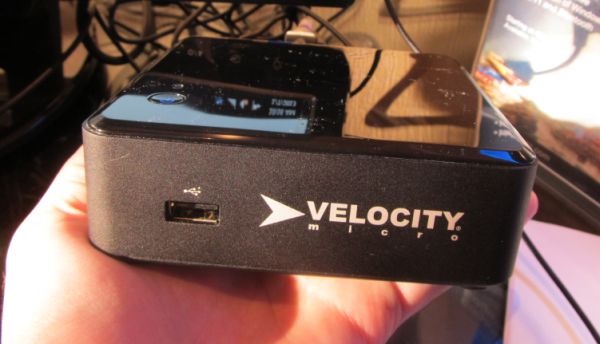 The company confirmed to me that the Edge Mini is based on Intel’s NUC (Next Unit of Computing), and while Intel is offering a white box barebones version, Velocity Micro is one of the first companies to sell a model configured with memory, storage, and an operating system. It’s available with Windows 7 and Windows 8.

I’ve spent a lot of time tinkering with mini PCs over the past year, but most have been low power systems with ARM-based processors. It’s nice to see a tiny computer capable of doing just about anything a full-sized PC could do… although the $499 starting price is a bit higher than the cost of an Android TV stick.

That $499 price covers a model without an operating system. You’ll have to pay $599 and up if you want a model with Windows pre-loaded.