Velocity Micro is showing off its first Android tablets featuring dual and quad core processors. The Velocity Micro Cruz D610 and Cruz Q610 should be available in the coming months for $199 and $249 respectively. 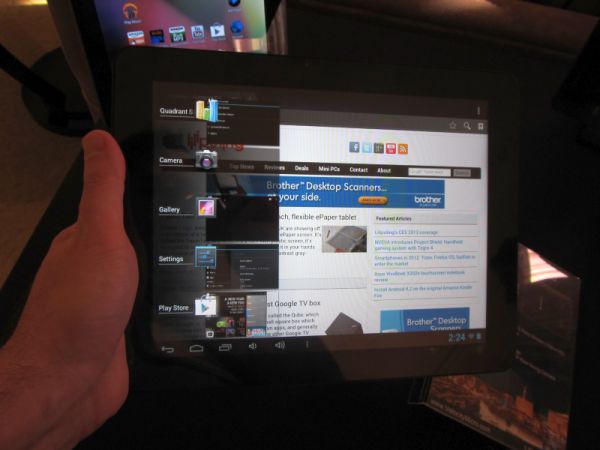 I got a chance to spend a few minutes with a Q610 running pre-release software, and while the Android 4.1 user interface felt a little jittery when I first picked up the tablet, after a moment things seemed to speed up a bit and I had no problem switching apps, opening new apps, surfing the web, or performing other basic duties.

According to the Quadrant benchmark test, this quad-core tablet is faster than a Motorola Atrix 4G, but not as zippy as an Asus Transformer TF201. In other words, it may have a quad-core CPU, but that’s enough to provide decent overall performance rather than blazing-fast speeds.

What the tablets really have going for them are the fact that these are the first Google certified tablets from Velocity Micro, which means they ship with the Google Play Store instead of the Amazon Appstore and offer other Google apps including Google Maps, Gmail, and YouTube.

The low starting prices could also look good to folks looking for cheap alternatives to the Apple iPad and other tablets with 9.7 inch screens.

Or you could hold out for an Archos Titanium tablet with a higher resolution 9.7 inch, 2048 x 1536 pixel display.

The dual core model also runs Android 4.1, and features 1GB of RAM, 8GB of storage, and a VGA front-facing camera.