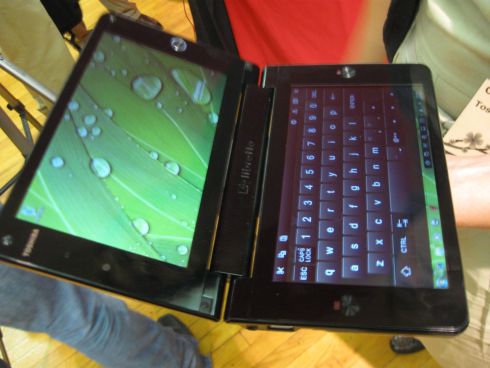 You can find my hands-on video and more photos below. But first, here are a few thoughts on the device.

I’m not entirely convinced that the on-screen keyboard functions well enough to justify dropping $1100 or more for this device, but I think that has more to do with the small 7 inch display, which simply doesn’t provide a lot of space for a full QWERTY keyboard, touchscreen or otherwise.

On the bright side, Toshiba offers 6 different keyboard configurations, including a split screen mode that you can use to hold the laptop in two hands and type with your thumbs much as you would on a smartphone. I didn’t have a lot of success using this mode, but I suspect there’s simply a learning curve to overcome. And if that’s not the problem, Toshiba could always push out a software update with an easier to use keyboard.

As I mentioned when Toshiba introduced the W100, the device has a 1.2GHz Intel Pentium U5400 ULV processor, 2GB of DDR3 memory, a 62GB solid state disk, 802.11b/g/n WiFi, and Bluetooth 2.1. It runs Windows 7 Home Premium, but Toshiba has added a few optimizations. For instance, next to the minimize and close boxes on every window is a new tool that lets you snap the window to one screen or the other, or maximize a window across both displays.

There’s also an accelerometer, allowing you to turn the Libretto W100 sideways for reading eBooks, viewing photos, or performing other tasks. While you can open the displays up at a 180 degree angle, there’s a fairly large hinge separating the displays, so you’re not really going to want to span photos or web pages across both screens very often. And you can’t swing the screen back 360 degrees to hold the W100 like a typical eBook reader with a single display. But at just 1.8 pounds, the whole thing really doesn’t weigh much more than an iPad, which could make reading eBooks reasonably pleasant.

I was surprised at just how small the whole thing seemed when folded up. It makes the original 7 inch Eee PC 701 look big. But the Libretto W100 is a little thick, thanks to a high capacity 8 cell battery which offers about 5 hours of run time. Those twin screens and the U5400 processor use a fair amount of power.

There are some custom hardware buttons around the side of the laptop that make it easier to use. For instance, there’s one button that you press from any screen to bring up the on-screen keyboard. Another brings up a custom Toshiba app launcher in the bottom screen.

Aside from the fact that I had a bit of trouble typing on the small touchscreen keyboard, my biggest problem was navigating through Windows 7 using the capacitive touchscreen display. The 7 inch, 1024 x 600 pixel displays are quite sharp — which is a good thing if the operating system is optimized to take full advantage of that sharpness.

Unfortunately, out of the box, this just means that when you’re trying to click on a precise point like the minimize or close box on a window, you’re pointing at a tiny dot on the screen with a fingertip that dwarfs that dot. You can probably tweak some DPI settings to minimize this problem, but an active digitizer and stylus would also help.

You can check out my hands-on video and more photos below.