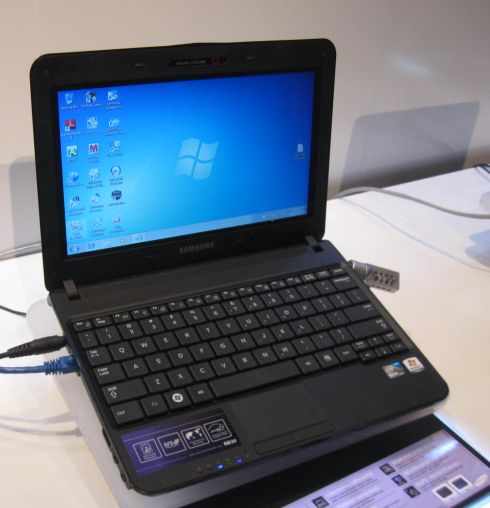 Samsung rolled out a handful of new netbooks this week, including the Samsung NB30 which is designed for durability. It’s not one of those super-duper rugged laptops that will keep ticking even after you run it over with a car. But the Samsung NB30 does feature a water-tight seal that can handle up to 50cc of water for a few seconds.

It also has a spill resistant keyboard and an anti-shock hard drive system that will shut down the hard drive if it detects the computer is falling, in order to prevent data loss. The computer is designed so that it can be dropped from up to 30 inches without any ill effects, not that they’d let me try this on the show floor.

The durable features extend to the lid, which has a textured, rubbery design that resists both fingerprints and scratches.

The laptop has a 1.66GHz Intel Atom N450 processor and runs Windows 7 Starter Edition. The laptop gets up to 11 hours of battery life, and it features a multitouch touchpad and a matte display, both of which are now standard on all of the new Samsung netbooks. The NB30 will sell for about $379 in the US.

The Samsung NB30 also has a new keyboard layout. The keys are mostly flat, but a little rounded at the edges. There’s space between each key, but not quite as much space as you’d find on a typical chiclet/island-style keyboard. This is the keyboard that comes with all of Samsung’s new models including the N150 and N210 as well as the NB30.

You can find more images of the Samsung NB30 after the break.