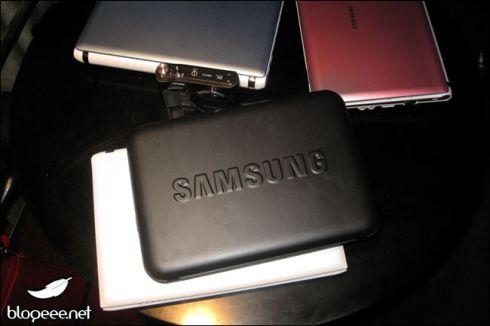 The Samsung N310 netbook that the company first announced just a few days ago appears to be making the rounds. Pocket Lint got a firsthand look on Tuesday, and last night Blogeee spotted one at an Intel event. And they were kind enough to photograph it from several angles and shoot a short video which you can find after the break.

Overall, the N310 looks like a rather attractive netbook once you get over the ridiculously large Samsung logo on the rubberized lid. The netbook has an excellent looking keyboard and a RAM access panel on the bottom of the unit that you can use to upgrade the RAM from 1GB to 2GB. There’s a single mouse button below the touchpad, but it’s nice and big.

The unit comes with a 4 cell battery, which Samsung claims is good for up to 5 hours of usage. From the Blogeee video, you can see that this is a 4000mAh battery that rests flush with the base of the unit. That means the extended 11 hour battery is going to add some bulk to the base of the netbook, although hopefully it will be more attractive than the extended battery for the HP Mini 1000.

You can read more about the Samsung N310 in the Liliputing Product Database. And you can check out the video after the break.

Samsung N310 from Blogeee.net on Vimeo.