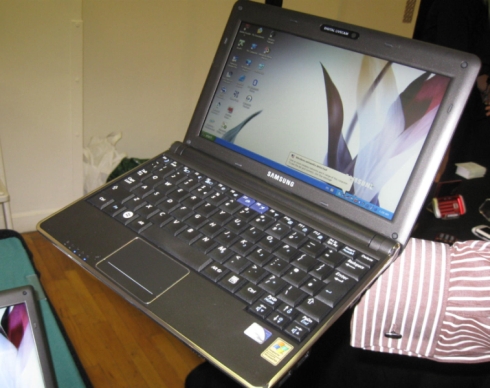 I got a chance to check out the new Samsung N140 netbook at Pepcom holiday show in New York last night. Samsung’s newest netbook is due out in the US in early November and it will ship with Windows 7 Starter Edition for $399.

The company is positioning the N140 as the replacement for the Samsung NC10. So forget about the N110 and N120. Those were something else. Samsung is finally phasing out the popular NC10, which was it’s well-received first entry into the netbook market and replacing it with this model.

To be honest, the Samsung N140 has virtually identical specs to the Samsung NC10. Both have 1.6GHz Intel Atom N270 processors, 1GB of RAM, and 160GB hard drives. But the new model features a redesigned case. It has a glossy lid and a matte finish on the palm rest, screen bezel, and a matte, non-glossy display. There are some metallic elements around the side of the device which are mostly cosmetic, but there’s also a bit of a raised area around the touchpad which makes it easier to detect the edges of the touch area with our finger. The keyboard is also a little bit larger than the one on the NC10.

There’s a chance Samsung may increase the specs a bit before launch, since Microsoft allows PC makers to load Windows 7 Starter Edition on netbooks with hard drives up to 250GB. But that would probably bump the price up a bit as well.

You can check out a hands-on video of the N140 with Samsung’s Jason Redmond after the break. I also snapped a few more pictures, including a couple of pictures of the 10 inch N140 next to the 11.6 inch Samsung N510 with NVIDIA ION graphics which was also on display at the trade show. Oh yeah, in other news, while I’d originally been hearing that the N510 would be due out in September or October, it looks like Samsung has decided to launch that model in early November (after Windows 7 is available) as well.