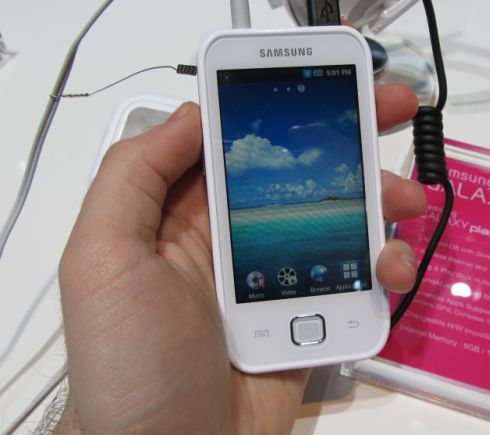 OK, so we’ve already established that the Creative Zen Touch 2 isn’t the best Android handheld media player that money can buy. But you know what is? The Samsung Galaxy Player. The only catch is that it’s not available for purchase in the US yet, but it should be soon. I got a chance to spend a few minutes with a Galaxy Player, and while it’s not a perfect device, it’s a pretty good option for anyone looking for the Android equivalent of an iPod touch.

The media player has the same 1GHz Hummingbird processor as the Samsung Galaxy S smartphone and the Galaxy Tab Android tablet. The device felt just as snappy as the best Android phones I’ve used when flipping between windows, launching applications, or watching video.

The Galaxy Player features 802.11b/g/n WiFi, Bluetooth 3.0, a USB port, and support for a range of media codecs including MP4, H264, WMV, DivX, and Xvid. The device also has a built-in FM Radio, a rear-facing camera, and a user replaceable battery.

There are a few things I wasn’t thrilled about. The 3.2 inch QVGA feels smaller than I had expected. While it’s more than big enough to get the job done if you’re primarily using the Galaxy Player to play music, a larger screen would come in handy for web surfing or viewing movies.

The case is quite obviously made of plastic. It’s sturdy and light weight, but it feels more like a toy when you hold it in your hand than the iPod touch, which has a metal and glass case.

On the bright side, the Galaxy Player is one of the few non-phone devices to come preloaded with the Google Android Market, which should make installing third party apps a snap. And because the Galaxy Player is essentially an Android phone without the ability to make phone calls, most apps should run just fine on the hardware.

All told, the Galaxy Player is probably the best option for anyone looking for an Android device that can fit in a pocket and which doesn’t make phone calls. But it’s not available for purchase yet, and by the time it is launched, I wouldn’t be surprised if there’s a bit more competition in this space.

4 replies on “Hands-on with the Samsung Galaxy Player”