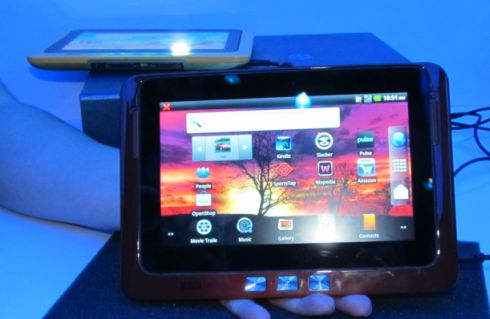 OpenPeak is showing off its upcoming tablet with an Intel Atom Moorestown processor. The demo units at CES are all running Google Android 2.2 and have 7 inch, 1024 x 600 pixel capacitive touchscreen displays, but OpenPeak says the specs are subject to change. For instance, the tablet could easily run MeeGo or use a different type of display tehnology.

That’s because the company doesn’t plan to release the tablet under its own brand name. Instead OpenPeak is working with partners like AT&T to develop hardware. A 3G-capable version should be available from AT&T later this year.

The tablets on display this week have a nice design with three physical buttons below the screen for triggering Android functions. The tablet also has a rear-facing camera and a decent range of expansion slots.

The company says the tablets get around 10 to 12 hours of battery life, which shows how far Intel has come in the low power processor space.