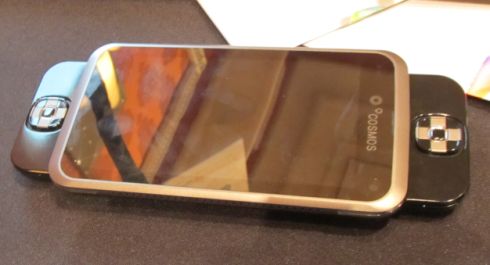 OCOSMOS has been showing off a gaming handheld computer with a 5 inch display called the OCS1 for a few months, but it turns out that the first version we saw — with a slide-out keyboard, is aimed at the Korean market. The company has several other 5 inch models, which will likely be aimed at Europe and the US, respectively.

This week the Korean company also unveiled a 9 inch tablet with a separate wireless keyboard. It’s called the OCS9.

I got a chance to check out a few of the new OCOSMOS devices last night, and while the slider was nowhere to be seen, I did see the OCS9 and a few variations of the OCS1. The only catch is that they don’t power up yet.

Both the 5 and 9 inch computers are expected to ship with a 1.5GHz Intel Atom Oak Trail chip. While I’m skeptical that Atom is the way to go for a gaming device, OCOSMOS seems confident that their devices will be able to handle high performance games such as Starcraft II thanks to improved graphics performance in the Oak Trail platform. 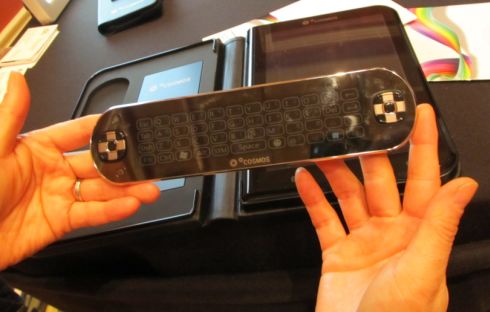 The new 9 inch OCS9 will be available with a custom case which stores a spare high capacity battery as well as a wireless keyboard that also has gamepads on either end. The tablet will run Windows 7 and come with 802.11b/g/n WiFi, Bluetooth 3.0, and GPS.

It has a 64GB SSD card and a microSD card slot for expansion, as well as two cameras, a gyroscope and accelerometer. A 3G option will also be available. 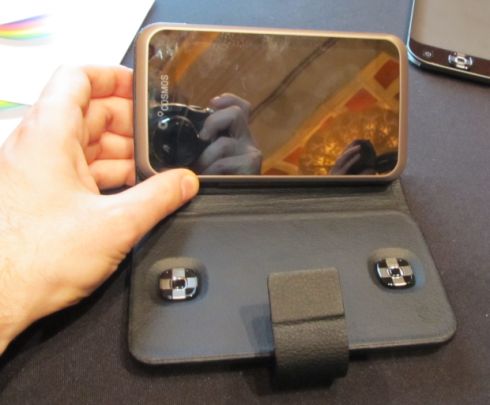 The company was showing two different versions of the OCS1 last night. The first features a 5 inch tablet that looks kind of like a touchscreen phone. There are no direction pads on the device itself. Instead, you can dock the OCS1 into one of several game controller devices.

The first snaps onto the back and adds D-pads on the left and right sides of the tablet, while the second is basically a carrying case with game controllers on the bottom, allowing you to prop up the OCS1 on a tablet (or maybe your lap) to get your game on. 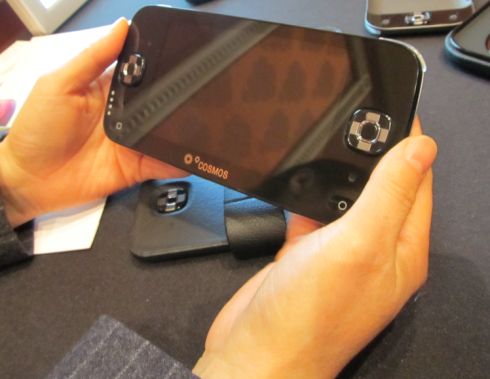 The second OCS1 model on display has integrated game controllers on the left and right sides so you can play games without an extra components.

The 5 inch capacitive touchscreen displays have resolutions of 1024 x 600 pixels and the tablets will be available with 32GB to 64GB solid state disks and microSD card slots for expansion. Like the OCS9, the little guys will have webcams, gyroscopes, and accelerometers.