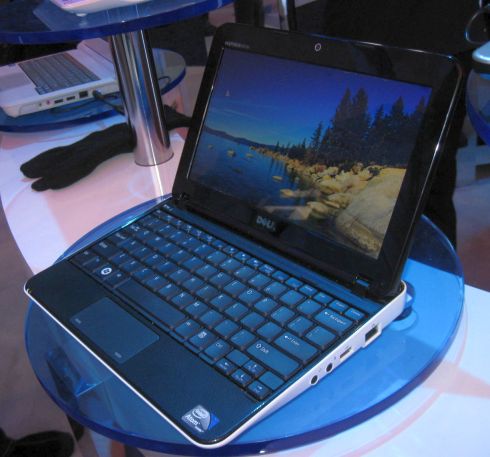 I managed to track down one of those shiny new next-generation Dell Inspiron Mini 10 models today. While the new netbook bears the same name as its predecessor, Dell has given the line a pretty significant overhaul. Not only does the new Mini 10 have a 1.66GHz Intel Atom Pine Trail CPU, but the keyboard also has more space between the keys, the battery sits flush with the base of the unit whether you have a 3 or 6 cell battery, and when the screen is open, it doesn’t sit quite flush with the back edge of the netbook.

The touchpad has also been retooled a bit. The new version seems a bit smaller than the old touchpad. But Dell is still integrating the left and right buttons directly into the touchpad.

As with earlier Dell models, it looks like you’ll have to open up your computer if you want to replace or upgrade the memory or other components. I didn’t see any access panels on the base of the netbook.