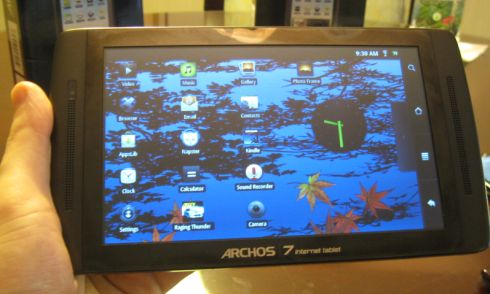 It’s pretty easy to divide the new tablets into two camps. The Archos 70 and Archos 101 are full fledged internet tablets with (almost) all the trappings. They have nice big capacitive touchscreen displays, fast 1GHz processors, WiFi, and Bluetooth. You can use these models as media players, eBook readers, web surfing companions, or what have you.

The Archos 28, Archos 32, and Archos 43 are smaller devices that are pretty much smartphone-sized portable media players. All three of these models have cheaper resistive touchscreen displays, and the 28 and 32 also have a few physical buttons below the screen since there’s not as much room for virtual on-screen buttons. In the case of the Archos 28, there isn’t even a volume button on the side of the device, instead you use the volume buttons below the display.

There are a few things that really make these devices stand out. The first is their low price tags. The Archos 101 will start at about $300, while the cheapest model, the Archos 28 will set you back just $99. But there are a few other features that could help make these little guys competitive, even after the introduction of Apple’s next-generation iPod touch, which starts at just $229.

For instance, the Archos 101, 70, and 43 all have HDMI output, and the Archos 32 has composite output. Just plug any of these devices (except for the Archos 28) into a TV and your display will pop up on the big screen, while your mobile device turns into a touchpad for controlling a mouse. You can also use the accelerometer as a controller, which makes it possible to play racing games and run other accelerometer-based apps on a TV.

Archos also offers support for a wide range of audio and video codecs, including H.264, WMV, MKV, DivX, Xvid, MP4, MOV, VOB, FLV, 3GP, WAV, FLAC, MP3, WMA, OGG Vorbis, and AAC. The company is working on deals with Amazon, Roxio, and other online video stores to allow users to purchase or rent videos which they can watch on the device, but right now Apple has the larger content library through its iTune store. On the other hand, you can play almost any unencrypted audio or video files you purchase, download from the internet, rip form your own DVD collection, or shoot with your own camera on the Archos tablets without first transcoding your files to a different format. Each device can also handle 720p HD video playback, even the Archos 28, which has a slower processor than its bigger siblings.

Archos has also updated its audio, video, and photo software with a much snazzier interface than the utilitarian media managers found on earlier models. Most of the changes are cosmetic, but I found it much easier to use the touchscreen volume, pause, and play controls in the new video player.

That said, there are a few things to consider when looking at these devices. First, they don’t ship with the full Google suite of Android apps such as Gmail, Google Calendar, or the Android Market. Instead, Archos bundles the third party AppsLib market. Right now, Archos says there are about 5,000 apps available for download including free and paid apps. That’s a far cry from the roughly 100,000 apps in the Android Market, although Archos points out that every single app in the AppsLib market is designed to run properly on these devices, so you won’t run into any hardware incompatibilities.

Some of the units I tested had the Kindle eBook reader, for instance, which looks pretty good on most of these displays (although I”m not sure about reading eBooks on a 2.8 inch screen). It’s also well known that hackers have managed to figure out how to install a hacked version of the Android Market and other Google Apps on older Archos tablets. I suspect the same method might work on the new models, but Archos wouldn’t comment on that.

I’m looking forward to spending some more time with these tablets once review units become available. In the meantime, you can check out two videos I shot with General Manager and Senior VP Ron Ferguson below:

11 replies on “Hands on with the new Archos tablets – video”