The Lenovo Yoga Smart Tab is an Android tablet that also doubles as a sort of smart display.

At first glance, it looks like a funny-shaped Android tablet. But it has a 3-microphone array for far-field voice recognition, and built-in stereo 2 watt speakers so you can hear Google Assistant reply when you’re talking to the tablet from across the room. 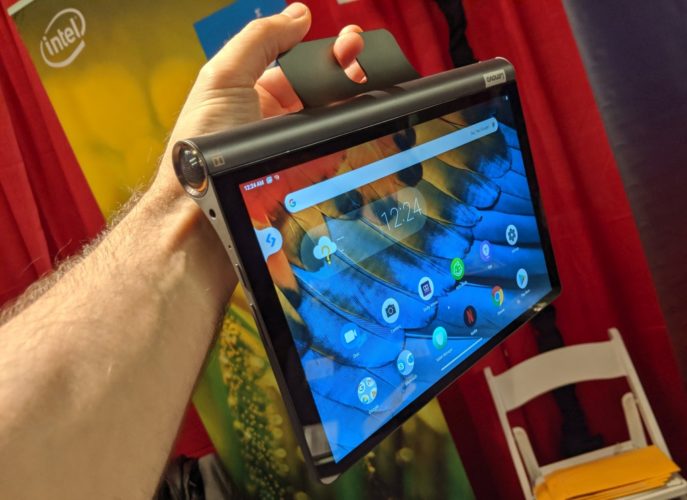 Of course, don’t expect anything better than laptop-quality audio. But that’s still a bit more speaker than you typically get from an Android tablet.

Oh, and the other funny thing about this tablet? It has a versatile, built-in kickstand with a hole in it that you can also use to hang the Yoga Smart Tab from a hook.

First announced at IFA earlier this month, the Yoga Smart Tab should be available by the end of September for $249. 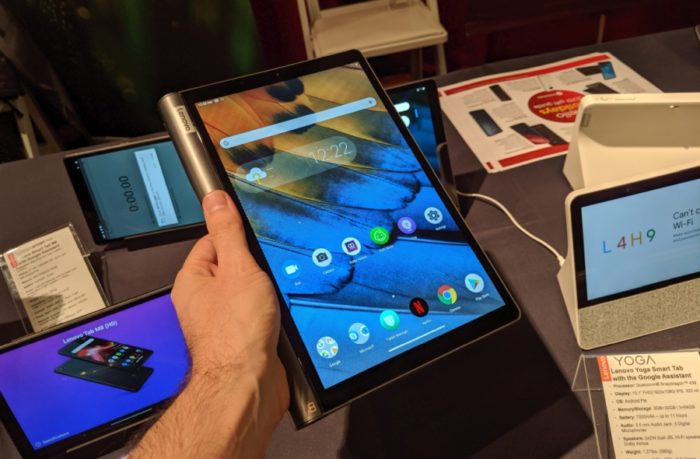 Design-wise, the tablet looks familiar… because it’s virtually identical to the Lenovo Yoga Tab 3 line of tablets launched in 2015.

The distinctive thing about these tablets is cylindrical bump on one side, where the battery is held. Pick the tablet up by that bump and the idea is that it fits comfortably in your hand sort of like a magazine with the pages turned over.

In practice, it is pretty comfortable to hold with one hand… as long as you’re holding it in portrait mode. In landscape, it’s a bit more awkward. 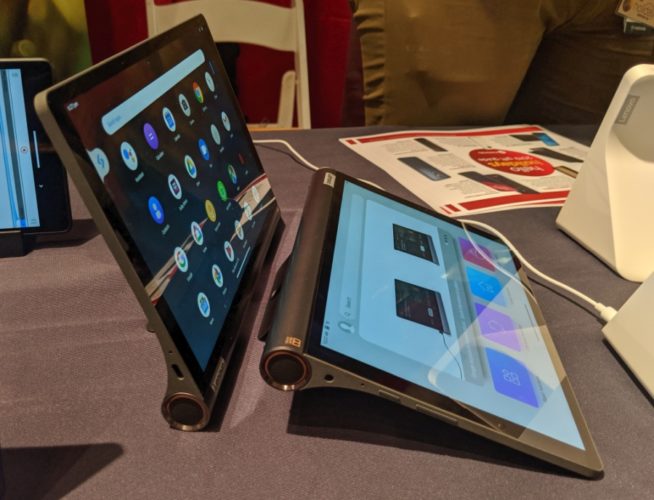 There’s also a kickstand that you can adjust to prop up the tablet for watching videos, viewing recipes, or whatever else you might want to do with a tablet that stands up. Or you can position the tablet so the stand proper ups the back to make 10-finger touchscreen typing slightly more palatable.

Under the hood, the Yoga Tab 3 has better specs than its predecessor… but it’s not exactly high-end hardware.

While the 10.1 inch, 1920 x 1080 pixel IPS display is nice, the Qualcomm Snapdragon 439 processor, 3GB of RAM, and 32GB of storage are nothing to write home about… although I wouldn’t expect much more than that from a tablet in this price range.

The Yoga Smart Tab also features a USB 2.0 Type-C port, a microSD card reader, a 3.5mm headphone jack, 802.11ac WiFi, an 8MP rear camera with auto-focus, and a 5MP fixed-focus front camera with an 86 degree field of view which should help pick up a small crowd of folks while video chatting.