The Lenovo ThinkPad Tablet 2 is a Windows 8 tablet with a 10 inch, 1366 x 768 pixel display, an Intel Atom Clover Trail processor, and a dual digitizer which lets you use your fingers or a pressure-sensitive pen to navigate the Windows 8 environment.

Lenovo also makes an optional keyboard dock which has a TouchPoint-style pointing stick in the center. 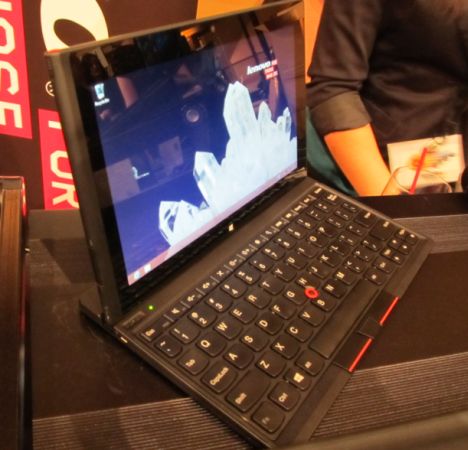 Lenovo’s new tablet is expected to hit the streets this month for $649. But I got a chance to check one out in person a few days ago.

There’s a slot in one corner of the tablet where you can tuck the digital pen when you’re not using it. This isn’t just a plastic stylus… it’s a plastic “pen” with some digital guts that let you do things like hover a mouse cursor by waving the pen near the surface of the tablet without touching it.

If you’re wondering why the ThinkPad Tablet 2 has a higher starting price than some other Windows 8 tablets with Clover Trail chips, you can thank that pen and the active digitizer that works with it.

The tablet has 2GB of RAM, up to 64GB of storage, a 2MP front-facing camera and an 8MP rear camera. It has a full-sized USB port and a micro HDMI port.

Unlike the keyboard docks that are available for some tablets, the optional ThinkPad Tablet 2 keyboard is basically just a Bluetooth keyboard designed for use with this particular tablet. That means it won’t extend your battery life.

Lenovo hasn’t announced a price for the keyboard yet.

Lenovo will offer models of the ThinkPad Tablet 2 with optional enterprise features such as fingerprint scanners or cellular capabilities. But those won’t be available on the $649 model.

What you will get on even the cheapest version of this tablet is the full Windows 8 experience, with support for both “modern” UI apps downloaded from the Windows Store and for classic apps designed for earlier versions of Windows.

10 replies on “Hands-on with the Lenovo ThinkPad Tablet 2”