Huawei’s latest 13 inch laptop is coming to North America later this month for $1000 and up, and the company is showing it off a little early during the Consumer Electronics Show in Las Vegas this week. 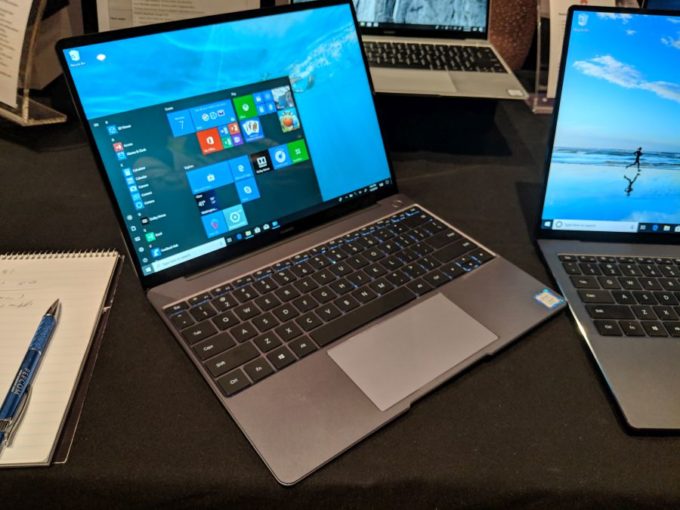 Like the Huawei MateBook X Pro, which launched last year, the new laptop has a 3:2 aspect ratio display and an an all-metal chassis. But it has a smaller screen (13 inches rather than 13.9 inches) and a larger top bezel (which means there’s room for a camera above the display rather than in the keyboard).

When placed side-by-side, it’s pretty clear that thew new model takes up less space, despite having a slightly more powerful processor and a slightly larger bezel.

The new laptop measures 11.3″ x 8.3″ x 0.6″ and weighs about 2.8 pounds. Under the hood it features an Intel Whiskey Lake processor, and there will be at least two configurations available:

What it doesn’t have are a lot of ports: there’s a headset jack and two USB Type-C ports. On the bright side those ports are versatile: you can use them to charge the laptop, connect a display, or hook up just about anything else. but you’ll probably need a hub or dock if you want to connect more than two accessories at once.

I was pretty impressed by the MateBook X Pro that I reviewed last year, so it’s nice to see the company expanding its line of devices with a new model… even if it doesn’t look that different from last year’s model. The screen is a little smaller and the processor a little faster, but you also get a smaller battery and fewer USB ports. So there are some trade-offs to consider.

2 replies on “Hands-on with the Huawei MateBook 13”