The eOneBook isn’t so much an electronic book reader as it is an electronic book. It opens and closes like a book. When it’s open there are dual E Ink displays, one on the left and another on the right. And it even comes with a book jacket.

But that’s not where the similarities end, because the eOneBook isn’t designed to let you load your own content or buy new eBooks. It comes with content preloaded, and that’s all you get. 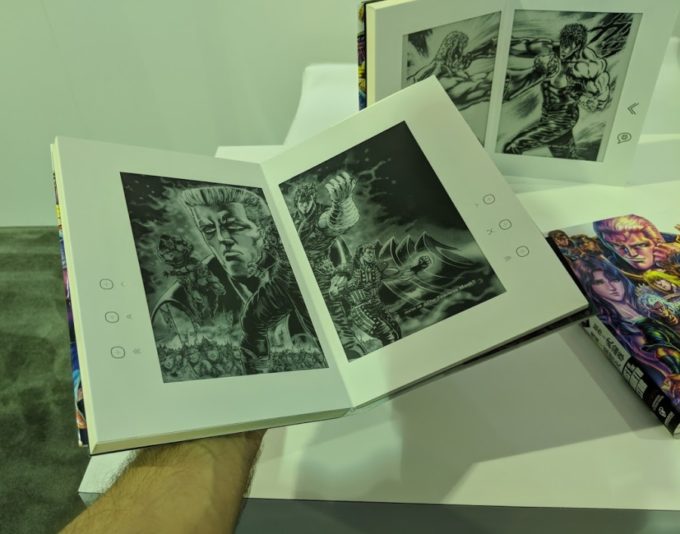 The new model has the same basic functionality as its predecessor. But there are six navigation buttons instead of four. Instead of just pressing page turn buttons on the left or right side of the screen to move forward or back, you can use the buttons to move through pages, chapters, or episodes (volumes).

The updated eOneBook still comes with the same content: 18 volumes of Fist of the North Star. That’s the complete set of this popular manga, and the idea is that you can fit all 18 into a device the size of one book.

You do have to pay a premium for that convenience though: the Fist of North Star eOneBook is expected to sell for $300 when it goes on sale soon. That’s a lot of money for an eReader that only lets you read a single series of books.

On the other hand, what you’re getting is essentially the hardware equivalent of two Kindles, plus a set of 18 books. So the price isn’t really unreasonable… if you really want to read this particular series and don’t have space for the whole set of books on your shelf.

Manga is a pretty good fit for this sort of gadget. While a single-screen device like a Kindle or Nook is fine for most books, Manga is a visual medium that sometimes includes content that’s meant to span two pages. And unlike many other forms of comics and graphic novels, manga is usually black and and white.

Oh, and since the eOneBook displays manga digitally, you can switch the language in speech bubbles between Japanese and English (or potentially other languages) just by tapping a button.

While the first eOneBook will ship with Fist of the North Star, Progress Technologies hopes to partner with publishers to release additional devices that come loaded with a different set of content.