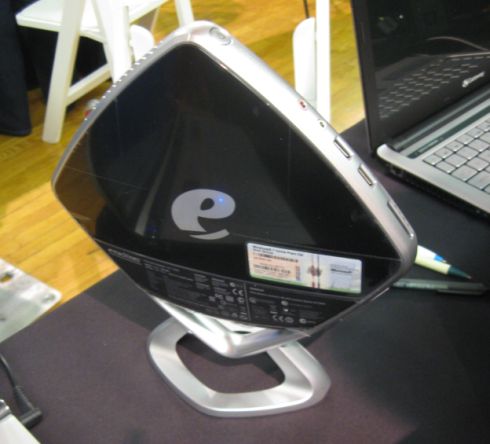 Acer subsidiary eMachines introduced a new mini-desktop in New Zealand this week called the ER1401. I couldn’t find any mention of it in the US, and for good reason: Here the nettop is called the eMachines ER1402 — and it’s already available for $299.99 from Amazon

I got a chance to check out an ER1402 demo unit at an event in New York last night. And while I didn’t get to test the performance, the main thing setting this nettop apart from most others on the market is the chipset. It shuns the usual Intel Atom processor for a 1.7GHz AMD Athlon II Neo K125 CPU. Sure, that single core CPU is the slowest in AMD’s new low power line of chips, but Acer says it should still offer better performance than most single core Atom processors.

One thing I was surprised to note is that the stand is screwed onto the base of the nettop. I’d kind of assumed the nettop simply slid into a more easily detachable base — not that it takes that much work to grab a screwdriver and remove two screws. But the stand feels a little flimsy and the demo unit wobbled a bit. You might want to consider removing the screws and just placing the nettop on its side.

2 replies on “Hands-on with the eMachines ER1402 nettop”