Windows 8 is designed to run on a range of devices including tablets, notebooks, desktop computers, and PCs that combine elements of each. Some do that by transforming from notebook to tablet mode. Others just slap a touchscreen onto a traditional notebook.

The Asus Zenbook Touch UX31A looks like any other member of the Asus Zenbook line of 13.3 inch ultrabooks. But this thin and light laptop has a high resolution touchscreen display, so you can navigate through Windows using the keyboard and touchpad or by reaching up and touching the display. 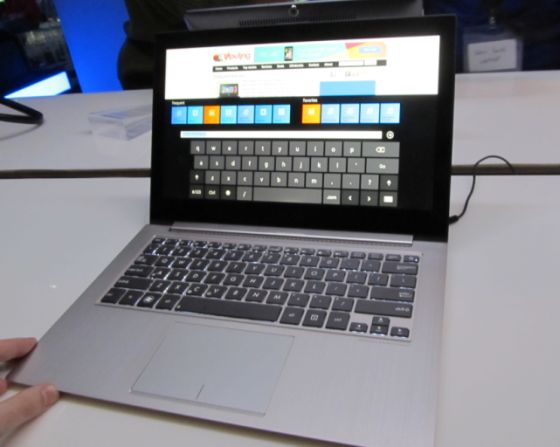 I got a chance to spend a few minutes with the laptop recently. It’s pretty hard to tell the touch-capable version of this ultrabook apart from the model without a touchscreen. At 3.1 pounds, the touch version weighs a bit more than the non-touch model which comes in at 2.9 pounds. But unless you put the two laptops side to side, you probably wouldn’t notice the 0.2 pound difference in weight.

At about 0.7 inches thick at the thickest point, the Zenbook Touch UX31A is just as thin as other ultrabooks in the Asus Zenbook line.

Unlike 13 inch Zenbook I reviewed earlier this year, the new model does have a backlit keyboard. It also has a more energy efficient processor. While I was able to get 5 to 6 hours of run time on the older Zenbook, Asus says the new model should last for more than 7 hours using a similar 50Whr battery.

I haven’t seen official pricing for the new touch-capable version of the Asus Zenbook UX31A yet.

Asus is also expected to add a touchscreen option to its 11.6 inch Asus Zenbook Prime UX21A at some point.

6 replies on “Hands-on with the Asus Zenbook UX31A Touch”