At $499, it’s the cheapest Windows tablet Asus plans to offer this fall. It even costs less than the VivoTab RT, because that ARM-based Windows RT tablet will ship with a keyboard dock. The VivoTab Smart is nothing but tablet.

Asus will offer an optional accessories including a magnetic cover that doubles as a kickstand and a Bluetooth keyboard. But for $499 what you get is a Windows 8 touchscreen tablet. 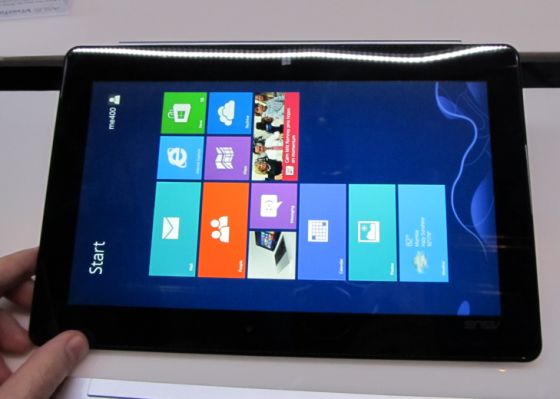 Since the tablet has an x86 processor and Windows 8 software, it can run virtually any app available for Windows 8. That sets it apart from ARM-based tablets which will only support Windows RT compatible apps available from the Windows Store.

In other words, you can install Microsoft Office 2010, the desktop version of Adobe Photoshop, or pretty much any other app you’d like on the VivoTab Smart. Just don’t expect those apps to run very quickly — Intel’s Clover Trail processor is a low-power chip designed to offer long battery life, not bleeding edge performance.

But you’d probably never know that if you just picked up the VivoTab Smart and started using it like an iPad-style tablet. I got a chance to spend a few minutes with the tablet earlier this week, and it handles the new Windows 8 touchscreen user interface quite well.

It was very responsive to touch gestures such as swiping to switch between apps or to bring up the Windows 8 Charms menu or other menus.

Full screen apps look great on the tablet and the 10.1 inch, 1.3 pound tablet feels comfortable to hold with one hand or two.

There’s a desktop mode if you want to run apps that don’t support the new full-screen UI. But it’s easier to navigate the Windows desktop with a mouse and keyboard. Fortunately the VivoTab Smart features Bluetooth and should work with a wide range of keyboards, although Asus will offer its own Bluetooth keyboard and touchpad.

It’s not quite as powerful as the keyboard dock the company offers for the $799 VivoTab Windows 8 tablet or $599 VivoTab RT. Both of those docks include additional ports and a battery which helps extend your run time. But the VivoTab Smart keyboard is thinner and lighter than a full-fledged dock.

Asus will also offer a screen cover which you can fold into a tablet stand. It attaches to one edge of the VivoTab Smart with a magnetic latch. At first I thought the latch was part of the tablet, since the magnets hold the computer and cover together so well. But if you give the screen cover a tug it comes right off the tablet.

The Asus VivoTab Smart features 2GB of RAM and up to 64GB of storage. It has a 2MP front-facing camera and a rear camera which will be either 5MP or 8MP. The tablet supports 802.11n WiFi and Bluetooth 4.0. Asus also plans to offer 3G and 4G models, possibly with GPS support.

With a 25Whr battery, Asus says you should be able to get about 8 hours of battery life.

4 replies on “Hands-on with the Asus VivoTab Smart”