The Asus Transformer Book blurs the lines between ultrabooks and tablets. It’s a notebook with a 13.3 inch, 1080p display — which you can pull away from the keyboard dock to use as a tablet.

Like the Asus Transformer line of tablets, the docking port doesn’t just house a keyboard. It also has a battery which helps provide extra run time. But the Transformer Book dock has one more trick up its sleeve: It has a hard drive, giving you extra storage space. 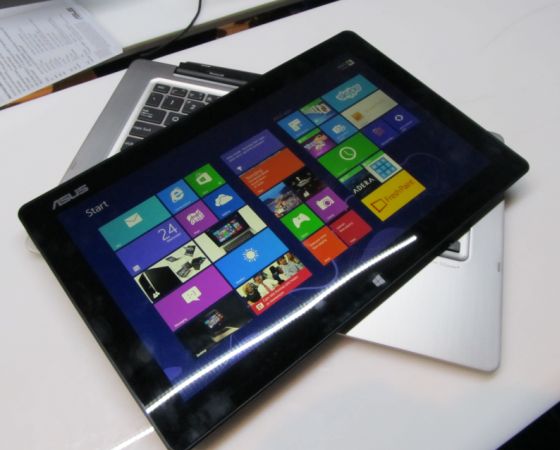 The CPU, memory, and other vital bits hang out in the tablet portion of the computer. There’s also a 128GB solid state disk behind the screen. But the keyboard contains a hard drive with up to 500GB of additional storage space.

Asus plans to bring the Transformer Book to market in the coming months — possibly in the first quarter of 2013. The company will offer models with up to an Intel Core i7 processor and 4GB of RAM.

The tablet has micro HDMI and microSD ports, but the keyboard dock adds a range of extra ports including USB and Ethernet ports.

Pricing hasn’t been determined yet.

Overall the Transformer Book makes a nice laptop — but a kind of awkward tablet. I find most tablets with screens larger than 10.1 inches not only to be kind of heavy, but also awkward to hold — especially in portrait mode. 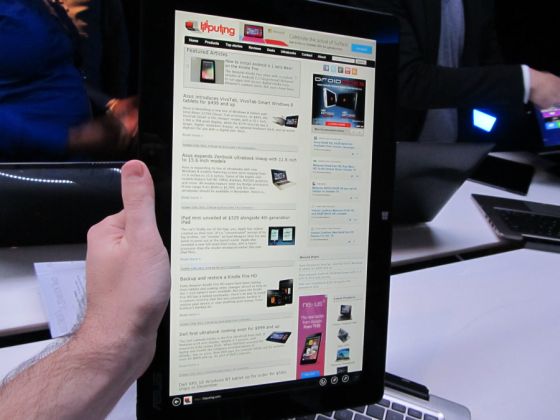 I also found that it took a bit more effort than I’d like to attach the tablet to the keyboard dock. But I was playing with a pre-release demo unit, so there’s a chance things might be better on the models Asus ships next year.

As you’d expect from a tablet with an Intel Ivy Bridge processor, the tablet felt quite responsive, although I only used it for a few minutes to surf the web and scroll through the Start Screen and a few Windows apps.

Screen rotation seems a little on the slow side when compared with an Android or iOS tablet. But everything else felt quite fast.

Note: It was noisy at this event, so I didn’t bother trying to talk at all in the video. What you’re hearing in the audio track is a conversation someone is having nearby. The $1499 price mentioned may be for a Core i7 version of the Transformer Book. It may not. I think that’s just an estimate at this point. The model with a Core i5 chip will likely be cheaper.

32 replies on “Hands-on with the Asus Transformer Book 13.3″ convertible tablet”