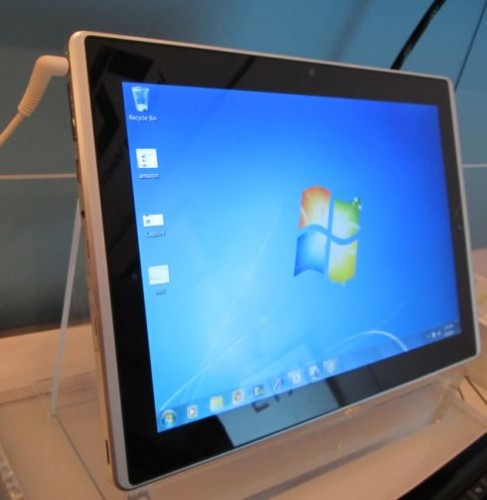 The Eee Slate EP121 is the largest tablet Asus introduced at CES this year. It’s also the most powerful, with a 1.33GHz Intel Core i5-U470 CPU and 4GB of RAM, and the only one to run Windows — or Windows 7 Home Premium to be exact. The computer also has a capacitive multitouch display and a Wacom digitizer for use with a stylus.

Asus says the EP121 is the most powerful Windows tablet around, and while long-time tablet enthusiasts may beg to differ, this model definitely comes closer to the traditional view of a slate PC than many of the other new models we’ve seen.

I got a chance to spend a few minutes with the EP121 the other day, and the build quality seems excellent, the screen is quite responsive to both finger and stylus input, and there’s even a spring-loaded slot in the case for storing the stylus so that it (hopefully) won’t get lost. The demo unit was also connected to a Bluetooth keyboard, just in case you had any question about whether that would be possible or not.

An Asus rep suggested that the final unit was supposed to have 10-finger multitouch, but the demo unit clearly only supported two simultaneous inputs. That’s enough for pinch-to-zoom and other two-finger gestures, as well as enough to make typing with on-screen keyboards easier, but we may have to wait and see if 10-finger support shows up in the finished product.

In my demo video I was unable to get the screen orientation to rotate, but it’s possible I may have missed a locking mechanism on the side of the computer.