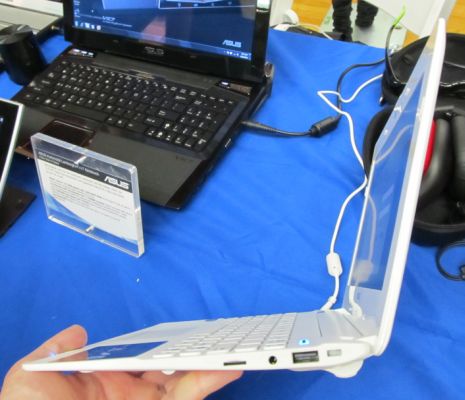 The Asus Eee PC X101 is a the thinnest 10 inch netbook Asus has released to date. It’s also the cheapest. The little notebook is available for as little as $199. In order to keep costs low, Asus loads the netbook with MeeGo Linux instead of Windows, uses a 1.33 GHz Intel Atom N435 processor instead of a faster chip, and offers just 8GB of storage using inexpensive flash memory. The netbook also comes with a 3 cell, 28Whr battery.

But despite those compromises, or perhaps because of them, the Eee PC X101 is one of the most interesting netbooks to come along in years. It’s not another cookie cutter machine. It bucks the Windows 7 Starter trend, for instance, by shipping with an alternate operating system — at the risk of confusing some users. It foregoes a large hard drive for a small amount of storage, encouraging users to store their data in the cloud.

I got a chance to play with an X101 for a few minutes this evening, and in some ways it feels like the obvious evolution of the earliest Asus netbooks. It’s thinner, lighter, and gets better battery life than the Eee PC 701 or Eee PC 900 for instance.

But it also feels a bit like a step backward from the company’s recent 10 inch models which have had nice large, comfortable keyboards and ample storage space. While the Eee PC X101 has a nice wide keyboard, it still feels cramped, thanks to keys that aren’t as tall as those on previous keyboards. I’m sure one could get used to the new layout, but I honestly have no idea why the keys are so small. In fact, the keyboard is almost exactly the same size as the one on the Asus Eee Pad Slider tablet — where space for large keys is much more scarce.

The good news is that I confirmed that this model does have an access panel on the bottom of the case, so you should be able to remove a screw, open up the case and replace the 1GB of RAM which ships standard with a 2GB module.

Asus will also only offer a 3 cell battery in the US, but a 6 cell battery may be available internationally — so if you can get your hands on one, you should be able to extend the battery life of the netbook. I’ve been told that it should get up to 4 hours of video playback time with the standard 3 cell battery.