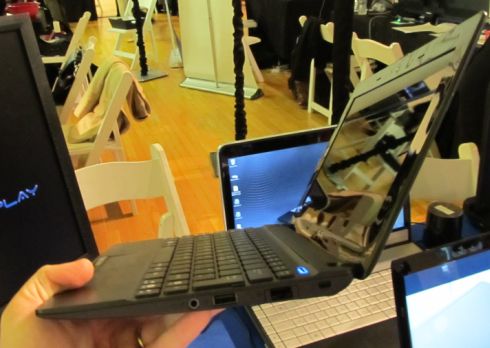 Asus plans to launch the Eee PC X101 10 inch netbook this summer for just under $200. That will give the X101 the lowest launch price of any netbook with an Intel Atom chip. You can occasionally find old, used, or refurbished models for that price, but I’ve never seen a netbook hit the shelves priced at $199.99 on day one before.

I got a chance to check out a pre-release model last night. It’s very thin and light for a 10 inch netbook. But part of the reason for that is the 3 cell battery. Asus will not be offering a 6 cell option in the US. The netbook is also a little thicker looking in real life than in the rendered images I’d seen, and there’s a VGA port that wasn’t present on the press pictures.

For the most part though, the Eee PC X101 looks like a pretty typical netbook. It has an almost-but-not-quite full sized keyboard, a small touchpad with a single button beneath it, and a 10.1 inch, 1024 x 600 pixel glossy display.

In order to keep costs down, Asus is building the netbook with a new 1.33 GHz Intel Atom N435 single core processor. It’s a 5W chip which uses a little less power, generates a little less heat, and offers a little less performance than the Atom N455 chips more commonly used.

The US version of the Eee PC X101 will also run MeeGo, an open source Linux-based operating system optimized for netbooks and other mobile devices. The netbook will be available in some regions with Windows 7 as well, but by going with MeeGo in the US, the company can avoid Windows licensing fees and keep the price low.

Unfortunately the demo unit I saw didn’t have MeeGo so I can’t say anything about how the netbook performs with the Linux distribution.

The netbook also has an 8GB solid state disk instead of a hard drive. That should help improve battery life, since a solid state disk uses less power than a hard disk. But 8GB isn’t a lot of space to work with.