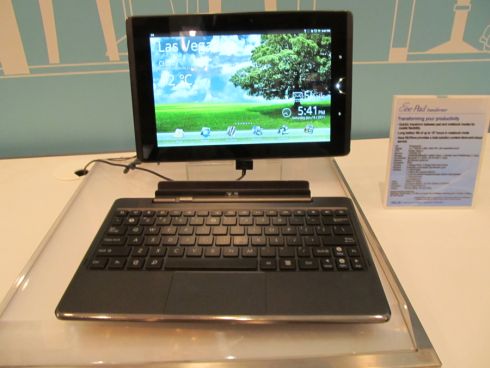 The Asus Eee Pad Transformer is one of four new tablets Asus introduced this week. Like the Eee Pad Slider, this model features a high resolution 10.1 inch 1280 x 800 pixel IPS capacitive touchscreen display, a dual core NVIDIA Tegra 2 processor, and a custom user interface designed to run on top of Android and give you quick access to weather, clock, email, and other Asus apps.

Since the keyboard isn’t permanently attached, the Transfomer tablet felt lighter in my hands than the Slider… except for when it was docked. Clearly the keyboard adds a little weight.


The tablet will include 802.11b/g/n WiFI, Bluetooth 2.1, a 5MP auto-focus camera on the back and a 1.2MP camera on the front, a G-sensor, gyroscope, light-sensor, and e-compass as well as HDMI output and a microSD card for expansion.

Eventually the tablet will be available with Google Android Honeycomb, but the demo model I saw was running Android 2.x.

Overall I like this design quite a bit. The tablet has a sturdy feel, and because there aren’t as many moving parts as in the slider, I have more confidence that the Transformer will stand up to wear and tear.

The Eee Pad Transformer is due out around April for somewhere between $399 and $699 depending on the amount of storage and other configuration options. A 3G-capable model may also be available. 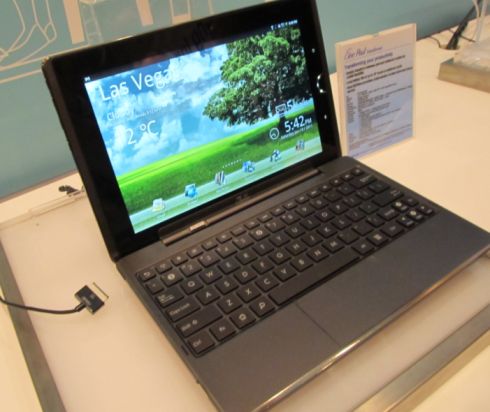 When docked to the keyboard, it’s hard to tell the Transformer apart from a netbook (until you look at the operating system). But the hardware is more versatile than most netbooks thanks to the tablet functionality. Whether you feel that Android meets your needs as well as Windows, Linux, or another operating system on a tablet/netbook may be another story.