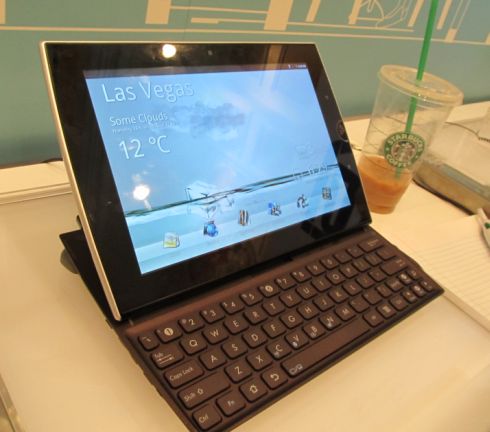 The Asus Eee Pad Slider is an Android tablet with a pull-out keyboard. It’s one of four new tablets Asus officially unveiled earlier this week, and I got a chance to play with it this morning.

As a tablet, there are a lot of things to like about the Slider. It has a snappy 1GHz dual core NVIDIA Tegra 2 processor, a capacitive touchscreen display with decent viewing angles, and a custom user interface which it shares with all of the new Asus tablets.

But what makes this model stand out is the full QWERTY keyboard tucked away behind the screen. To pull it out, you lift one one edge of the screen and pull. The keyboard appears below, and the display is propped up at an angle which should make typing comfortable. Just push the back of the screen forward again and you can close the tablet.

The Eee Pad slider is surprisingly thin for a tablet with a built-in keyboard hiding behind the display, but it felt a bit heavy for my taste. The demo unit was also clearly a prototype that’s seen a lot of use in the last few days, as I had to push hard enough to open and close the keyboard that I kind of worried about breaking the sliding mechanism. Hopefully that issue will be resolved by launch — or it’s possible that it’s sturdier than I thought and that it would take more than a hard push to break this tablet.

5 replies on “Hands-on with the Asus Eee Pad Slider”