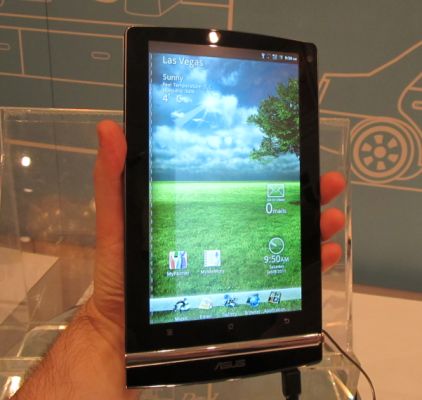 The Eee Pad MeMo is the smallest of the tablets introduced by Asus at CES this year, with a 7 inch screen. But while it doesn’t have a detachable or slide-out keyboard, the MeMo is an interesting little machine it its own right.

First of all, it has a high resolution 1024 x 600 pixel capacitive touchscreen display. Second, it has a dual core 1.2GHz Qualcomm 8260 processor. Third, it’s expected to ship with Android 3.0 Honeycomb, although the demo unit was running Android 2.x. fourth, it has the same custom Asus Android user interface as the other tablets, with a retooled home screen, program launcher, and some custom apps.

But the thing that really sets the MeMo apart from other 7 inch tablets is the stylus. Now, I know some folks hate stylus input, but here’s the thing: You don’t have to use the stylus on this tablet. It’s purely optional. But the stylus which fits into a compartment in the case has a nice sturdy metal case and an unusual rubbery pointing area which allows for precise, pressure-sensitive input. This can come in handy if you want to write handwritten notes on the tablet, or use drawing or painting apps. In fact, using the stylus actually feels more like using a paintbrush than a pen.

I’m not much of an artist, but I was pretty impressed with the sensitivity of the stylus. The tablet is also light weight and feels good in the hand, while many of the 10 inch models I’ve tested over the past week have felt just a little hefty to hold in one hand while reading a book or taking notes.

Asus says the Eee Pad MeMo should be available this summer for between $499 and $699.

4 replies on “Hands-on with the Asus Eee Pad MeMo”