The Acer Iconia W510 is a 10 inch tablet with an Intel Atom Z2760 Clover Trail processor and Windows 8 software. It’s one of the most affordable Windows 8 tablets on the market, with a starting price of $499. But if you want a model with all the bells and whistles the price jumps to $749.

A handful of stores including J&R and Adorama are taking pre-orders for the $749 model, but I haven’t seen any retailers selling the $499 model yet.

I did, however, get a chance to spend a few minutes with the tablet this week. 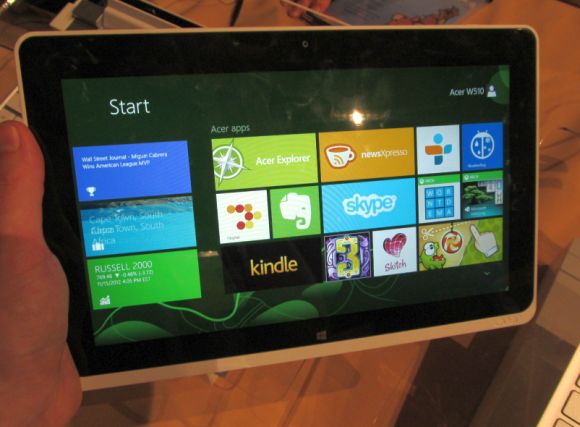 It features microSD, USB, and HDMI ports as well as docking ports for an optional keyboard. For the most part the tablet seemed pretty responsive in my tests… but I didn’t try running any heavy duty apps like Photoshop.

Since the tablet is running Windows 8 and not Windows RT, it can run full desktop-style apps designed for earlier versions of Windows though. It’s not limited to apps downloaded from the Windows Store.

Like many Windows tablets I’ve used, automatic screen rotation is kind of slow on the Iconia W510. But most of the Windows 8 apps I’ve seen (with the possible exception of eBook and magazine apps) look better in landscape mode than portrait, so I wouldn’t expect to spend a lot of time rotating the screen on this type of device.

The $749 model includes 64GB of storage and comes with a keyboard docking station. The keyboard dock also has a built-in battery, which Acer says should double the computer’s run time, giving you up to 18 hours of total battery life.

It’s not clear whether Acer will offer the keyboard dock as a standalone option for those that would rather buy a 32GB tablet and keyboard for around $649.

Overall, the Iconia W510 appears to be a reasonably well-priced, well-specced Windows 8 tablet… for those that are satisfied with the performance offered by Intel’s low power Clover Trail processors, which are designed to offer always-on capabilities and long battery life rather than high performance for CPU-heavy tasks.

If you are looking for more desktop-class performance, Acer also offers the Iconia W700 tablet with an Intel Core i3 processor for $799 or less.