Acer’s Iconia Tab W700 is a Windows 8 tablet with an 11.6 inch, 1920 x 1080 pixel display and an Intel Core i3 or Core i5 Ivy Bridge processor. But priced around $800, it’s not much more expensive than some Windows tablets with lower power Intel Atom processors.

More importantly, Acer throws in a couple of accessories that let you use the Iconia Tab W700 like a desktop computer. A desktop dock and Bluetooth keyboard are included in the sub-$800 price. 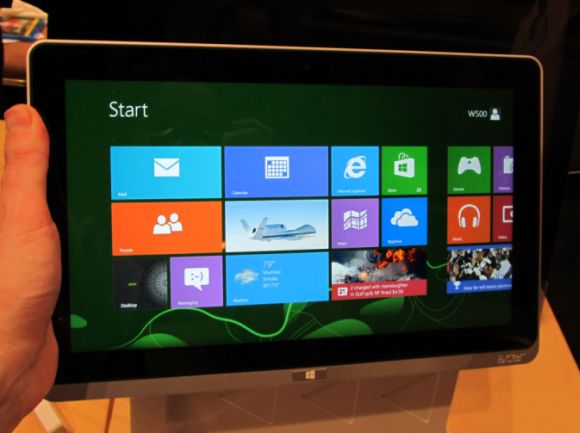 The idea is that you can slide the 2.3 pound tablet into its dock and use it on your desk, even plugging in an external display if you want a bigger screen. Then when you want to get up and go, you can just remove it from its docking station and keep working on the go.

Acer has been showing off a demo unit hooked up to a large touchscreen monitor which lets you forget there’s even a tablet involved. You can just swipe and tap the big screen to interact with Windows 8, or use the Bluetooth keyboard.

Things would be a little more awkward with a non-touchscreen monitor, because it’s kind of tricky to split your attention between the big display and the tablet itself when you’re using the tablet’s touchscreen. But you could always just use the keyboard and a mouse and ignore the tablet functionality altogether.

While the tablet is a little bigger and heavier than some other models, it also packs a lot more power than a Windows 8 tablet with an Atom processor or a Windows RT tablet with an ARM-based chip. You can run real desktop software on this machine and expect the same kind of performance you’d get from a decent laptop computer.

The 1080 screen looks pretty great when using Windows 8 “modern” style full-screen apps. Text looks a little too sharp for my taste when running desktop-style apps, but odds are you’d run those apps most often when the tablet is docked… in which case you can add an external display. You could also try playing around with font and dpi settings to make reading on the tablet a little more comfortable.

While the Acer Iconia Tab W700 has an official starting price of $799, and that’s what some stores are charging for pre-orders, you can also find some stores selling the tablet (and dock and keyboard) for under $770.

That price gets you a model with an Intel Core i3 processor and 64GB of storage. Acer also plans to sell models with Core i5 chips and up to 128GB of storage, with prices climbing to $1000 or so.