The Acer Chromebook Tab 10 is the first tablet tablet to ship with Chrome OS… but it’s easy to think of this as an Android tablet that just happens to be able to run the desktop version of Google’s chrome web browser.

It supports the Google Play Store and Android apps, allowing the Chromebook Tab 10 to do just about everything an Android tablet can… and then some.

Acer introduced the tablet in March, but the company is initially targeting the education market, so I got my first chance to spend a few minutes with a demo unit at Acer’s press event in New York today. It’s a nice little device, particularly for the price: it sells for $329. 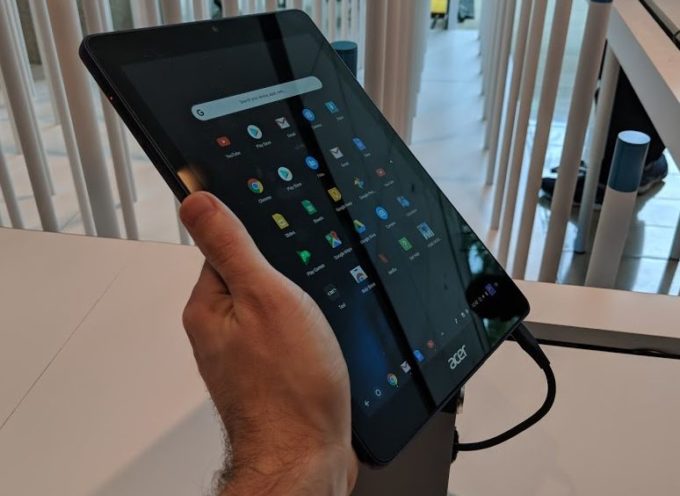 It also comes with a Wacom pen that hangs out in a slot in the tablet when it’s not in use. When you remove it from its hiding place, the tablet notices and pops up a menu asking if you’d like to take a screenshot, open a note-taking app, or perform other actions that you might need a pen for.

There’s a 5MP rear camera and 2MP front camera. They’re nothing to write home about. The back of the tablet is plastic, with a ridged design that seems like it’ll probably be somewhat fingerprint resistant.

By computer standards, the Chromebook Tab 10 doesn’t have a lot of ports: there’s a single USB 3.1 Type-C port, a headset jack, and a microSD card reader. But those last two are things you can’t take for granted on modern phones, so it’s nice to see them in a tablet, I guess.

Acer currently has no plans to offer an official keyboard for the Chromebook Tab 10, which makes the use of the word “book” in the name seem strange. But there’s nothing stopping you from using your own wired or wireless keyboard of choice.

I’d like to see Acer target the consumer market with a similar device… but I suspect we’ll have to see how the tablet is received in the education space before the company decides whether to do that.

10 replies on “Hands-on with the Acer Chromebook Tab 10”