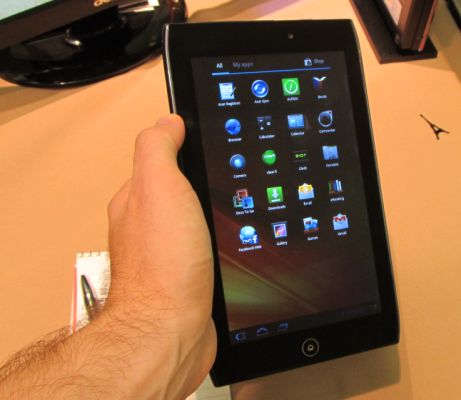 The Acer Iconia Tab A100 is the first 7 inch tablet running Google Android 3.2 Honeycomb to go on sale in the US. The little tablet launched last month, and it’s available for about $330.

That price is a bit higher than what you’ll pay for upcoming budget tablets from Lenovo and ViewSonic, but at $330, the A100 is still one of the cheapest Honeycomb tablets on the market.

Yet the only biggest difference between this little tablet and other Honeycomb devices are the smaller screen and the lower display resolution. While most Honeycomb tablets so far have featured 10.1 inch, 1280 x 800 pixel displays, the Acer Iconia Tab A100 has a 7 inch, 1024 x 600 pixel screen.

It’s also smaller and lighter than its 10 inch peers, weighing about 0.92 pounds and fitting comfortably in one hand for reading a book, surfing the web, or watching a video. Unfortunately it also has a relatively small 1530mAh battery. Acer says you should get up to 5 hours of web browsing time or 4.5 hours of video playback time from the tablet. Many of its larger peers get close two twice that amount of battery life.