Nubia’s Red Magic Mars smartphone is coming to the US and Europe later this month, with prices starting at $399 for a model with a Qualcomm Snapdragon 845 processor, 6GB of RAM, 64GB of storage, and a 3,800 mAh battery.

That alone would make this an interesting addition to the US smartphone landscape. But the Red Magic Mars has a few other unusual features: higher-priced models will be available with up to 10GB of RAM and 256GB of storage… and the phone is aimed squarely at gamers. 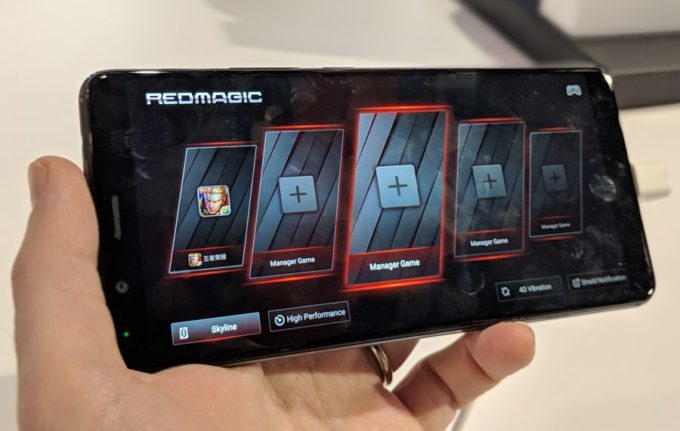 It has trigger buttons on one side, a physical switch for enabling a high-performance game mode (at the potential cost of decreased battery life), and a cooling system that uses a combination of air and liquid to keep the system from overheating.

It also has a really geeky looking back cover with an RGB LED light strip down the center. When using the phone normally, the light strip glows in a single color. But when you switch to gaming mode you can also enable lighting effects so that colors shift in interesting ways.

I’m always a little baffled by RGB lighting on gaming hardware — presumably when you’re using a gaming PC you’re supposed to look at the display rather than the case. That’s even more true for a phone, where it would be awfully difficult to look at the back while playing games on the touchscreen display on the front… unless you’re standing in front of a mirror, I guess.

Anyway, at least it’s a distinguishing factor… but I kind of wonder if it’s one that will end up limiting this phone’s appeal. I wouldn’t mind picking up a $399 smartphone with a Snapdragon 845 processor and 6GB of RAM, but I’m not sure if I’d want one that looks like this.

Then again, I’m not really all that into gaming hardware. A lot of people are.