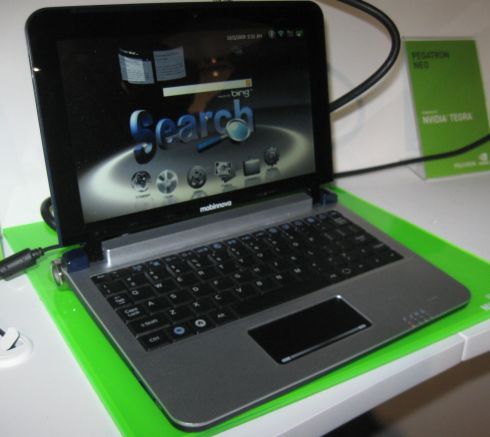 NVIDIA says there are 50 or so different designs in the works for devices based on the new Tegra 2 platform. I got a chance to catch up with some reps from NVIDIA this afternoon, and they say some of those tablets and smartbooks could be available this year. Today Asus introduced a tablet prototype, making Asus the first big name company to hop about the Tegra 2 bandwagon. But we’re also seeing a number of other prototypes based on the platform including the latest version of the Mobinnova Beam mini-laptop and the new 7 inch ICD Ultra tablet introduced today. 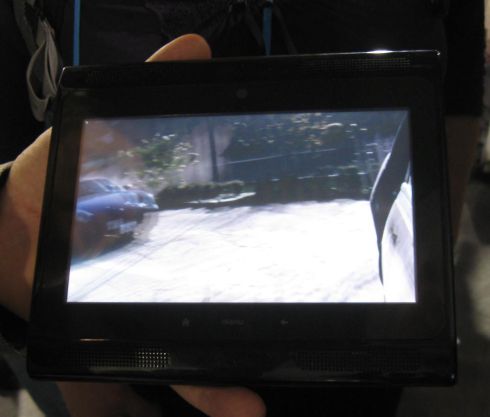 The ICD Ultra features a 1024 x 600 pixel touchscreen display and runs Google Android. It also packs 802.11b/g WiFi, Bluetooth 2.1, and Verizon has announced that it will provide a WiMAX capable version of the tablet later this year.

Tegra 2 is a step up from the original Tegra platform in several respects. It uses a 40nm chip instead of a 65nm one; can handle 1080p HD video instead of topping out at 720p, and it has a dual core 1GHz CPU rather than a single core 650MHz one. Overall, NVIDIA says it gets about 4x the performance for everyday tasks, which should make a huge difference for web browsing and running applications that can’t rely on the GPU.

Adobe Flash content is supported, which means both 1080p HD Flash video and Flash-based video games and other applications. And of course, where Tegra 2 really shines is local and web video playback. In fact, the recently launched D-Link Boxee Box which runs the Boxee media center software for accessing local and online media on your HDTV is running on Tegra 2.

You can find videos of the Mobinnova Beam and ICD Ultra in action after the break. There are also some photos of other Tegra 2-based prototypes.