QNAP makes a wide range of NAS (Network Attached Storage) products for home and business use. I’ve been using a relatively inexpensive model to back up my data for a little while, and I also use it as a Plex media server that allows me to stream music, movies, and other content to my Roku TV, phone, and other gadgets.

My NAS is in my office, but if I’d opted for one of the company’s new multimedia-centric models then maybe I would have considered putting it in the living room. The larger model is fanless, which should make it quieter than a typical NAS, and both models are designed for multimedia applications.

Lee wrote about the QNAP HS-453DX last month, but I got a chance to see it in person this week at the Consumer Electronics Show, along with its smaller sibling, the QNAP TBS-453DX. 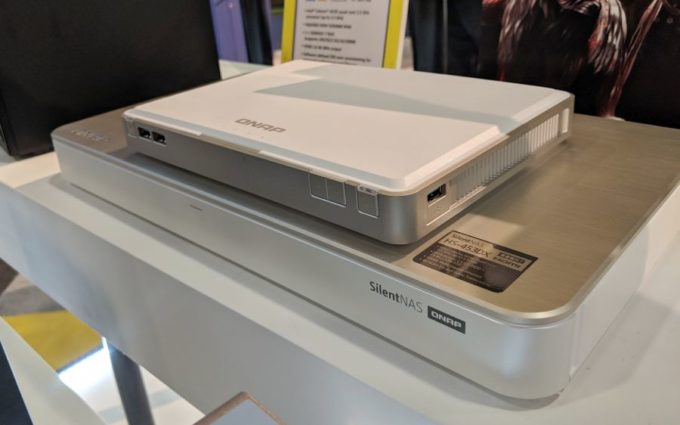 Both models are available with 4GB or 8GB of RAM and both are powered by a 1.5 GHz Intel Celeron J4105 quad-core processor. That’s a 10 watt Intel Gemini Lake chip designed for low-power desktop computers.

The TBS-453DX does have a small fan under the hood though, so it’s likely to be a little noisier than the larger version.

Under the hood, the larger model has two bays for 3.5 inch or 2.5 inch hard drives or SSDs as well as two M.2 SATA SSDs, while the smaller version supports four M.2 2280 SSDs, but has no room at all for a hard drive.

QNAP positions the smaller TBS-453DX model as more of a “hybrid-cloud” storage device. Solid state storage can get pretty expensive, so the idea is that you could use a relatively small amount of storage on this compact device, and then mount one or more cloud storage services to the device and enable them to cache data locally on an as-needed basis.

That would let you take this relatively compact NAS with you to meetings or other situations where a hybrid cloud storage device with support for 4K @60 Hz video output and real-time video transcoding might come in handy.

The 5..3 pound HS-453DX, meanwhile, isn’t exactly something you’re likely to carry around with you. Instead it’s the sort of device that would look at home tucked into your media center setup.

With support for two hard drives and two SSDs, it could hold a massive amount of data… or half as much if you decide to use a RAID 1 setup where data is mirrored between multiple drives for redundancy and reduced risk of data loss.

There are a bunch of I/O options for both storage devices: both models have two Gigabit Ethernet ports, a bunch of USB 3.0 and USB 2.0 ports, lone out jacks and two microphone inputs for some reason (maybe so you can use the OceanKTV Karaoke app for QNAP NAS devices?)

Update: An earlier version of this article states that both devices are fanless. That is incorrect: the smaller TBS-453DX does have a fan, but the larger HS-453DX model does not. 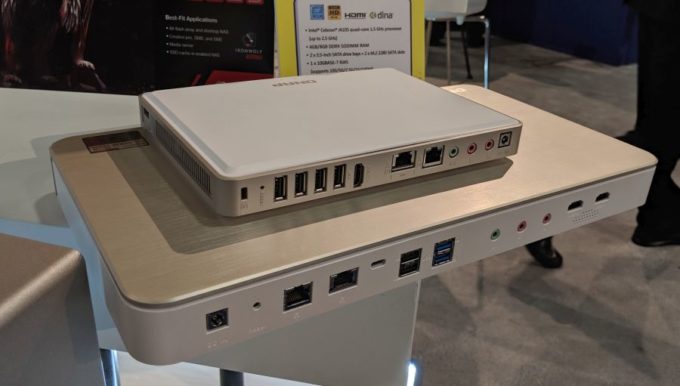