Microsoft announced their newest Bluetooth mice and keyboards made for Windows 8 recently. This past weekend they showed them off in person at the BlogHer ’12 conference in New York City.

I had a chance to test them out and see if they’re really as light and comfortable as the company claimed. 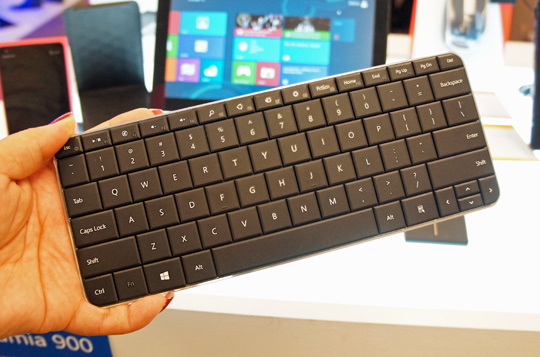 I like the Wedge Mobile Keyboard a lot more than I thought I would. It’s lighter than it seems and has a good overall design. The rubber cover is the best feature.

Not only will the cover protect the keys (and your tablet’s display) while mobile, it also doubles as a stand. The hinge is nice and sturdy so you don’t worry about it collapsing.

Problem is, the keys are a little too close together, making it difficult to type on if you’re a touch typist. It’s something you can get used to if you really want. Hunt-and-peckers also may not mind as much.

The Wedge Touch Mouse is just as uncomfortable to use as I thought it would be from the pictures. Microsoft gets an A for aesthetics, though.

I like the Sculpt Mobile Keyboard better in terms of typing comfort. It’s less mobile than the Wedge and doesn’t have a cover. I’d worry about carrying it in my bag without some protection.

Check out the video for the full hands-on.