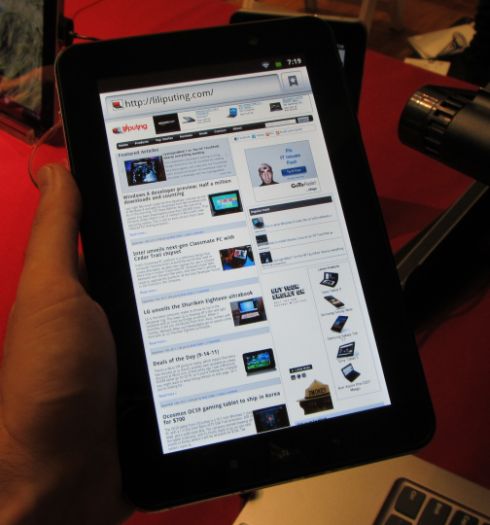 Earlier this year 10 inch tablets with $500 price tags and Google Android Honeycomb were all the rage. But the second half of 2011 is starting to look like 7 inch tablet season. Acer, ViewSonic, and Lenovo are all trotting out 7 inch devices, typically for much lower prices than their big brothers.

The Lenovo IdeaPad A1 is one of the most interesting of the bunch, because it comes from a top tier computer maker, has a great screen, and a very low price tag. Lenovo will sell this little guy for $199.

For that price you get a 7 inch, 1024 x 600 pixel display with wide viewing angles which looks really great. Graphics are sharp, colors look good, and because the 7 inch tablet weighs less than a pound and is easy to hold in one hand, I imagine it would make an excellent eBook reader — although it does have a glossy screen, so it probably won’t be great for outdoor use.

The tablet also comes with access to the Google Android Market and features offline GPS capabilities, both of which are features that help set it apart from many other budget 7 inch tablets.

Unfortunately the Lenovo IdeaPad A1 felt a little sluggish compared with many other tablets I’ve tested recently. It has a 1 GHz single core ARM Cortex-A8 processor, which is the likely bottleneck. During the few minutes I spent playing with the tablet, it felt like it took a little longer for apps to launch or for the screen to react to some touches than on some competing tablets.

The tablet also comes with Google Android 2.3 Gingerbread instead of Android 3.2 Honeycomb — that means it’s running a version of Android optimized for phones rather than tablets. But honestly, there still aren’t that many Honeycomb-specific apps available, so I doubt most people would notice a difference, and Android 2.3 looks pretty good on a sharp 7 inch screen.

6 replies on “Hands on with Lenovo’s $199 Android tablet”