Ever wonder what a desktop PC that’s just barely thick enough for full-sized USB ports would look like?

It’s a tiny PC with an Intel Bay Trail processor and support for Windows or Android. Egreat says the factory price for a model with Windows 8.1 with Bing preloaded is $85, which means that this tiny computer could have a street price of not much more than $100. 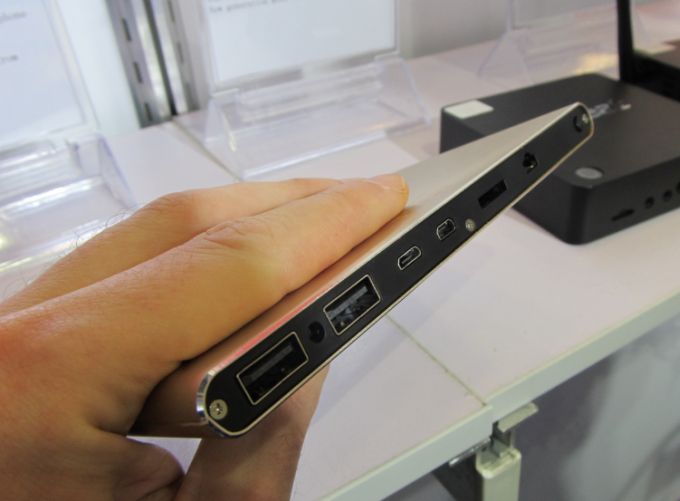 In fact, some other Chinese companies have already released extraordinarily similar looking models that sell for as little as $104. But Egreat says while it designed and manufactured the i5 in-house… albeit, possibly with a bit of inspiration borrowed from designs from other companies.

While I didn’t get a chance to actually use the system, the guts of this tiny computer are pretty similar to those for the Zotac ZBOX PI320 pico I tested last year, and I was reasonably impressed with the performance offered by that $200ish computer.

The Egreat i5 is just cheaper and thinner… and has fewer ports. There are certainly more functional Windows PCs available… but there aren’t many that are thinner than this.

Oh, and if you’re wondering why a computer with an Intel Atom processor is called the i5, it’s just part of Egreat’s naming scheme. The company also has slightly larger i2, i3, and i6 models — all of which feature the same Intel Atom Z3735F processor.

Intel is bringing its own tiny PC to market this year, but while the upcoming Intel Compute Stick may take up less space than the Egreat i5, it also has just one HDMI connector, a microSD card slot, and a single USB port.